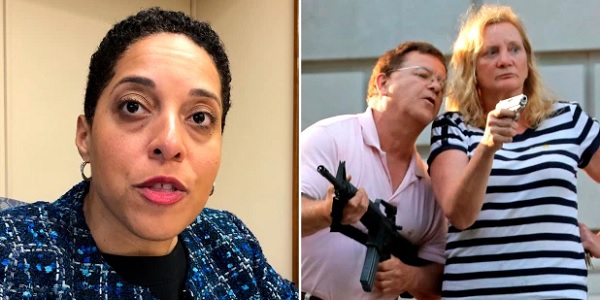 A federal judge in Missouri has spiked a scheme by St. Louis Circuit Attorney Kimberly Gardner to conceal evidence of her bungled prosecution of former Missouri Gov. Eric Greitens, whose faced charges filed by Gardner that later were dropped.

It is Just the News that has been fighting for the documents for several years, and Editor in Chief John Solomon expressed satisfaction with the result.

Gardner, among the first in a wave of local prosecutors whose campaigns were funded by George Soros, an extreme leftist, was hit with the order from St. Louis City Circuit Judge Jason Sengheiser.

She had been claiming “privilege” regarding the documents, and had refused to turn them over despite previous court orders to do so.

“Kimberly Gardner has repeatedly been on the wrong side of the law,” explained Solomon about the fight over the documents, “first in bringing charges against a sitting governor without the requisite evidence, then in violating numerous standards of professional conduct for a lawyer and finally by throwing repeated roadblocks to complying with the Missouri Sunshine law.

“I am grateful that Judge Sengheiser — like the state appeals court and Missouri Supreme Court — saw through Gardner’s cloud of obstruction and ordered the release of these specific documents. In the end, the public is the ultimate winner as they will now see what if any outside forces influenced her bungled prosecution of Gov. Greitens. And we look forward to pressing for more transparency in the litigation that lies ahead, deeply grateful for the excellent work that the Southeastern Legal Foundation, Kimberly Hermann and David Roland have provided to create this win for transparency.”

The Missouri Bar’s ethics division already has accused Gardner of misconduct for prosecuting Greitens, and has recommended a reprimand.

That report accused Gardner of misconduct through withholding and misrepresenting evidence and allowing her chief investigator to commit perjury.

The case started in 2019 when Solomon requested the documents regarding Gardner’s prosecution of Greitens. She accused him of felony invasion of privacy. But the case was dropped when Gardner confessed that she did not have evidence.

Solomon said he asked for records of communication between Gardner’s office, Soros, and several left-wing organizations.

A trial court sided with Solomon in 2020, and Solomon filed a motion to hold her in contempt of court.

The Missouri Court of Appeals for the Eastern District also had rejected Gardner’s strategy to conceal documents.

Gardner also is the prosecutor who infamously brought charges against two Missouri residents. the McCloskeys, who simply held guns while defending their own property from a Black Lives Matter mob that broke into their neighborhood.