Judge to review Psaki's email admitting 'lying' to the media 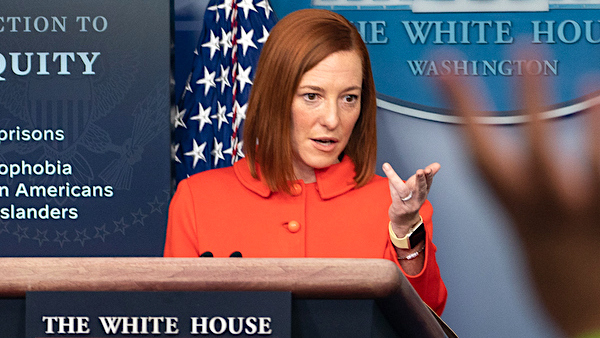 A court has ordered the federal government to hand over for review an email by Jennifer Psaki regarding secret Obama-Biden administration meetings with Iran.

The order came in a lawsuit by the American Center for Law and Justice, which contends the State Department deleted an embarrassing admission in a 2013 press briefing video that the administration lied about its Iran negotiations.

The ruling centers on an email by Psaki, who now is White House secretary, which the ACLJ claims is evidence that she lied during the briefing, when she was serving as the State Department spokeswoman.

In an exchange about the Obama administration’s secret negotiations with Iran, she was asked, “Is it the policy of the State Department, where the preservation or the secrecy of secret negotiations is concerned, to lie in order to achieve that goal?”

Psaki replied: “I think there are times where diplomacy needs privacy in order to progress. This is a good example of that.”

The ACLJ filed a Freedom of Information Act lawsuit to obtain the email.

“Despite attempts by the Deep State to try and sweep this one under the rug, the court agreed with our arguments and ordered the Biden State Department to hand over a crucial document for ‘in camera’ review by the judge himself,” the ACLJ said.

The complaint was filed five years ago.

The ACLJ said it caught the Obama-Biden administration at the time “censoring an official State Department press briefing video to delete an embarrassing admission that the admission lied about its Iran deal negotiations.”

The administration first claimed it was a “glitch” but later admitted it was done deliberately.

Psaki’s email, obtained by the ACLJ, has information relevant to the issue, the organization said.

However, “in typical Deep State fashion, the chain of emails has been so heavily redacted that it is hard to make heads or tails of the conversation, except that the Iran discussion is specifically referenced.”

The ACLJ said Psaki “essentially admitted she feels it is justifiable to withhold the truth from the American people – otherwise known as lying – at her own discretion.”

“It’s rather alarming that Ms. Psaki has authorized herself to determine when she should and should not tell the truth, considering that she now speaks for the White House and President Biden,” the ACLJ said.

The Obama-Biden administration “engaged in closed-door negotiations with Iran, the leading state sponsor of terrorism in the world, long before the public knew.”

“And then they tried to obscure the facts to cover it up. They lied to the American people about the most critical and controversial diplomatic negotiations in decades.”

The American people have a right to know who was involved in the cover-up, the ACLJ said.

“By law we have a right to know if our leader was conducting clandestine meetings with the world’s number one state sponsor of terrorism.”