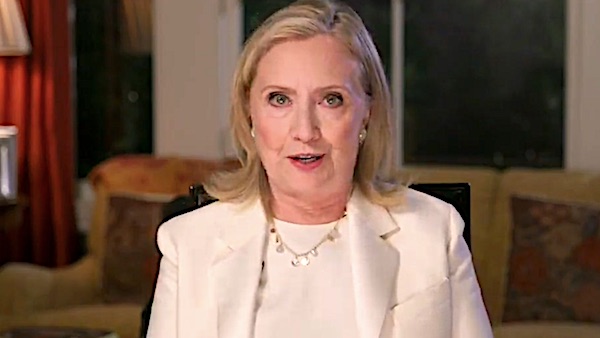 When she was secretary of state, Hillary Clinton warned in a cable to French officials that research at the Wuhan Institute of Virology could lead to a “biological weapons proliferation concern.”

The cable, obtained via Wikileaks, was addressed to all embassies in member nations ahead of a plenary session in Paris of the Australia Group, Sept. 21-25, 2009, reported Jack Posobiec for Human Events.

The international export control forum was organized to prevent the spread of chemical and biological weapons. Members include European Union nations, India, Japan and South Korea. But China is not a member.

“We believe it is important to focus on emerging chemical and biological technologies, trends in the trade of CBW-related goods and threats,” Clinton’s cable said to France.

She said participants in the forum would benefit from hearing about France’s “experiences assisting China in setting up a Biosafety Level-4 (BSL-4) laboratory at the Wuhan Institute of Virology from the export control and intangible technology transfer perspectives.”

“We are particularly interested to know how China plans to vet incoming foreign researchers from countries of biological weapons proliferation concern,” she said.

Her cable noted the U.S. “believes AG members would be interested in any information you can share related to China and North Korea, specifically information related to:

After Dr. Anthony Fauci, amid growing evidence, admitted in May that the lab-leak theory is a possible explanation for the origin of the COVID-19 pandemic, the Washington Post also changed its tune. The Post’s Glenn Kessler said that in “recent months the idea that it emerged from the Wuhan Institute of Virology (WIV) – once dismissed as a ridiculous conspiracy theory – has gained new credence.”

“How and why did this happen?” he asked. “For one, efforts to discover a natural source of the virus have failed. Second, early efforts to spotlight a lab leak often got mixed up with speculation that the virus was deliberately created as a bioweapon.”

Kessler – known for his “Pinocchio” ratings evaluating the truthfulness of statements by public figures and media – said that those two facts made it “easier for many scientists to dismiss the lab scenario as tin-hat nonsense.”

But there is evidence that the Wuhan lab collaborated with the People’s Liberation Army, and many who long have been skeptical of the natural-origin theory pushed by Beijing argue establishment media simply didn’t do their job. Instead, they took the word of the Chinese Communist Party and of scientists blinded by a hatred for Donald Trump and, in some instances, saddled with a conflict of interest.

One year ago, at the White House, Trump was asked by a reporter: “Have you seen anything at this point that gives you a high degree of confidence that the Wuhan Institute of Virology was the origin of this virus?”

“Yes, I have. Yes, I have,” Trump replied. “And I think the World Health Organization [WHO] should be ashamed of themselves because they’re like the public relations agency for China.”

Last month, the Wall Street Journal reported that when Trump began pushing the lab hypothesis last year, other governments that could have helped press for a lab investigation distanced themselves from the administration, according to Andrew Bremberg, the U.S. ambassador to the WHO at the time.

“It was like an overnight shift,” he said. “When the president first touched this, they shut down.”