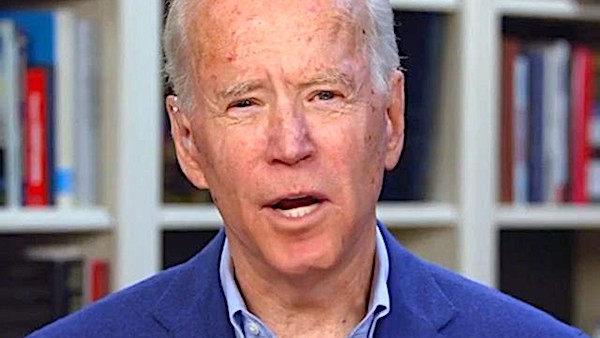 Joe Biden, when he was vice president for Barack Obama and in charge of Ukraine policy, infamously threatened Ukraine’s president that the U.S. would withhold aid unless he fired the nation’s top prosecutor.

The prosecutor happened to be investigating allegations of corruption by the company that was paying Biden’s son Hunter some $50,000 a month to serve on its board.

Now, One America News Network reported, Joe Biden is withholding military aid from Ukraine that had already been approved by Congress amid Russian military maneuvers at Ukraine’s borders.

“Biden will reportedly provide only $125 million to Ukraine this year, although Congress has already approved a $275 million package. White House officials said $150 million of that aid will be withheld until Ukraine conducts the reforms that Biden is asking for,” the report said.

OANN then pointed out that a year ago, President Trump was impeached and ultimately acquitted over the allegation of withholding aid from Ukraine.

The claim was made despite the fact Ukraine’s president publicly stated he felt no pressure to do anything for Trump.

While Democrats claimed at the time the Office of Management and Budget broke the law, the OMB disputed that allegation.

The Conservative Treehouse blog said the Biden administration “is now doing exactly the same thing President Trump was accused of, wrongfully, which led to the a ridiculous impeachment effort.”

Biden’s pressure on Ukraine resulted in the firing of prosecutor Victor Shokin. Later, Shokin filed a criminal complaint against Biden, accusing him of committing a “criminal offense” in his effort to fire him.

Biden boasted during a Council on Foreign Relations panel of successfully getting Shokin fired:

The French website Les Crisis published Shokin’s complaint. It states that Biden’s request “concerning my ousting from the post of the Attorney General of Ukraine as a condition for the granting of financial (economic) assistance is qualified as pressure, which represents interference in the internal affairs of Ukraine on the part of a foreign power in violation of one of the principles of international law.”

The complaint is addressed to the interim director of the National Bureau of Investigation of Ukraine.

It charges that Biden “abused his power as the vice president of the United States in order to prevent me from carrying out by duties as the prosecutor general of Ukraine, thus preventing me from solving serious crimes and arresting the persons who committed those crimes, has the characteristics of the crime stipulated in Article 343 party 2 of the Criminal Code of Ukraine.”

The complaint states Shokin was investigating accusations of crimes involving the managers of Burisma. It contends Biden launched a pressure campaign, based on his “firmly hostile attitude toward me,” to have him removed.