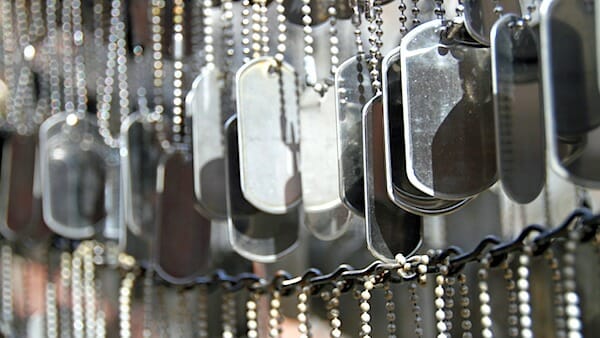 A few years back there was a fight over a company that distributes dog tags to members of the U.S. military, because they contained both the Marine emblem as well as a Bible verse.

Foul, cried one complaint. Those products can’t contain both because that might be seen as a military endorsement of a Bible verse.

However, the issue still hasn’t been resolved because there’s now the question of bias by the military against faith.

That’s according to the American Center for Law and Justice, which said it still is trying to get all the facts in the fight.

“In February 2020, we told you about the reported United States Marine Corps (‘USMC’) decision to pull the license of Shields of Strength (‘SoS’) in response to one radical organization’s erroneous complaint. The anti-Christian organization demanded that the USMC ‘immediately revoke and cancel the current approval for ‘Shields of Strength’ to continue using the official USMC emblem on any and/or all of its religious items for sale.’”

Since SoS is a group that supports America’s troops “in a powerful way,” the ACLJ decided to dig further, and submitted a Freedom of Information Act request for details.

The military, the ACLJ reported, apparently still doesn’t understand the potential program, as in response to the FOIA, the military delivered “several pages of documents that raise more questions than answers.”

Among the details delivered were that there were email conversations about the issue, and specific references to depriving Shields of Strength of permission for their “religious materials.”

The Marines even told one license applicant, “We’ve asked you repeatedly to NOT use USMC trademarks on religious items, as it is forbidden by DOD policy for us to allow you to do so.”

The ACLJ said its hunt for details, “and especially the policies against religion,” will continue.