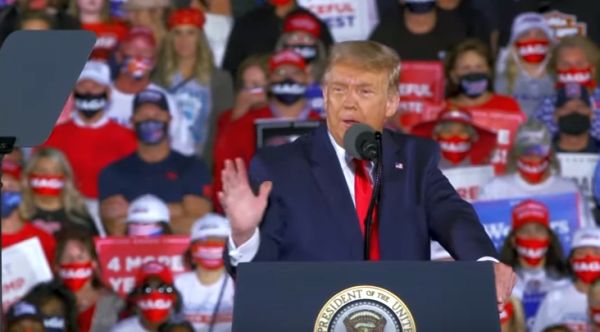 Matt Gaetz, the firebrand Republican representative from Florida, says he will definitely nominate President Donald Trump for speaker of the House in 2023 – possibly handing him the White House for six more years.

He made the announcement at Saturday night’s rally in Georgia spontaneously. He’s made short remarks publicly several times over the last year and a half; however, this is the first time in such a large forum.

Four days before Joe Biden was sworn in as president – almost a year and half ago – the plan was pushed by Joseph Farah. It’s been picking up steam ever since.

Joseph Farah says the possibility of the former president winning the speaker’s chair is terrifying Democrats.

“The speaker of the House is third in line for the presidency,” he explains. “With Biden and Kamala Harris facing impeachment after the midterms, all Trump has to do is wait for the two positions to fail. That makes the Democrats scared – very scared.”

Then Republicans name a new speaker of the House – either Rep. Kevin McCarthy of California or Rep. Jim Jordan of Ohio.

Another question about the plan is whether a non-representative can seek the speakership. The Constitution doesn’t require it – though no one else has been elected. It’s mostly tradition.

Trump, as House speaker, would be well-positioned to direct the impeachment inquiries into Biden and Harris in early 2023.

But it really depends on how well the 2022 elections go for the Republicans in the House and Senate. It will take a wipe-out of Democrats to get it done.

In the House, it only takes a majority. In the Senate, it requires a two-thirds majority.

“And wouldn’t that be sweet revenge – to oversee impeachment and wind up as president in early 2023,” says Farah. “He will need the extra time, plus reelection as president, to undo the damage Biden and Harris have already done in their first term.”