Mysterious 'giants' of Bible get probed in new TV series 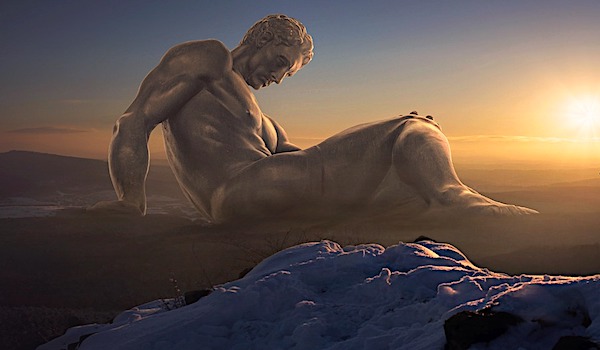 “There were giants in the earth in those days.” (Genesis 6:4)

It’s one of the most perplexing and disturbing passages in the Bible.

Giants. They were also called Nephilim. They were referred to as “mighty men which were of old, men of renown.” Sometimes they were called “the sons of Anak.” They were called “Anakims,” “Emims,” “Zamzummims” and Rephaims.” And people were like “grasshoppers” in their sight.

A new docu-series examination of these beings will present a rare, well-researched and sobering look at this biblical mystery.

The minds behind the project are Rudy Landa, a senior producer and director at The Inspiration Networks and company CEO David Cerullo.

Their love for all things biblical was the catalyst for their decision to commence making the film in 2019.

“The Bible describes the Nephilim in several places,” Landa said. “The main commentary of the Nephilim happens in Genesis chapter six. Most people cruise right over that passage. The Nephilim were the offspring of heavenly beings who were placed in the spiritual realm to watch over the earth in those days. They were principalities in the heavenly realm.”

In Genesis chapter 6, before the flood of Noah, Scripture mentions the “sons of Elohim” marrying the daughters of men, with their offspring called Nephilim, which the King James Version translates as “giants.”

“The docu-series brings the biblical sources, but it should be interesting for non-religious viewers,” Landa said. “We seek out actual proof, the traces and clues that are out there in the world, and not just the faith-based claims. Because there is so much archaeological evidence that needs to be explored.”

Landa did not wish to take a sensational treatment to a sensational subject, so he brought in guidance from author Douglas Van Dorn, who had just written a book on the topic.

“We present the evidence and we invite people to research to reach their own conclusions,” Landa said. “We aren’t dogmatic and don’t hide anything. We bring the sources and encourage the viewer to ask questions, to continue to study and do their own research.”

The journey spans the globe, examining locations in the United States, Egypt, and Peru, and most importantly, the Golan Heights in Israel.

“It makes sense to start in Israel where the story of the Nephilim began,” Landa stressed. “And that is the Golan.”

The apocryphal Book of Enoch is said to describe the Nephilim, and suggests the name of Mount Hermon comes from the Hebrew “charm,” meaning “to be banished.” It noted the Nephilim, which is often translated as “fallen ones,” were kicked out of heaven and sent to earth two dwell at Mount Hermon. It’s in that region of Bashan where the ancient Israelites were challenged by the infamous king Og as they were entering the Promised Land.

The Post reports: “Landa’s search for the truth also brought him to Gilgal Refaim (Wheel of the Giants), an enigmatic rock formation in the Golan. From the ground, it appears as random piles of rocks. But from above it is quite impressive, revealing itself to be five concentric rings with the outer ring measuring more than 500 feet wide. At its center is a mound of loose stones over 65 feet in diameter and over 16 feet tall, covering a central chamber carved into solid rock. Archaeologists generally place the beginning of the construction as early as 3500 BCE. The purpose of Gilgal Refaim is still a mystery and the focus of scholarly debate.”

“There are theories that claim that Og was buried at Gilgal Refaim,” Landa said.

The film examines the possibility of the structure’s center being used as an excarnation chamber where the body could decompose. The bones would later be removed and ultimately buried in a large “serpentine structure of loose stones adjacent to stone rings.”

“This dual arrangement, circles of stones near a serpentine mound, appears in several places around the world where it was known to be used as a necropolis for this form of burial,” Landa explained.

A similar ancient serpentine mound is found in Ohio, and is actually known as “Serpent Mound.”

“There was clearly a very intelligent design behind the site,” Landa said.

The Post reports: “Based on Genesis 14:13, which describes a ‘fugitive’ (Palit) who told Abram about Lot’s capture, Jewish tradition teaches that Og was alive in the time of Noah but escaped the flood by clinging to the side of the Ark.

“Og was named in Deuteronomy (3:11) as the only remaining man from the Rephaim. A rough estimate of Og’s size can be made based on a reference to the size of his bed which is described as nine amot long and four amot wide. The biblical measurement of an amah, literally the length of a forearm, is 9.2 inches, which would mean that Og’s bed was over 14 feet long and over six feet wide.”

The program “Angels & Giants: The Watchers & Nephilim” is expected to air this fall once a distribution channel is selected.