News crew is the focus of investigation for undercover gun stories 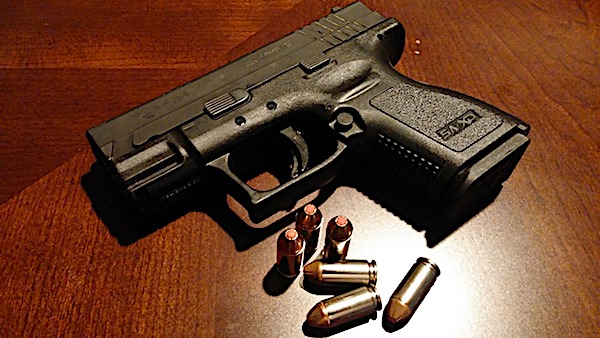 The House Speaker in Pennsylvania is looking into what “actions” might be possible in response to a complaint from a gun rights organization that some network television reporters and staff members for the state attorney general’s office were involved in gun crimes – in the course of “reporting” a story.

WND reported weeks ago on the concerns raised by the Second Amendment Foundation over an investigation by NBC News and the attorney general’s office.

They allegedly committed felonies in their coordinated effort to do an undercover “hidden camera investigation” at a gun show.

The report purported to focus on the sales of so-called “ghost gun” kits.

The foundation reported that, “NBC reporter Vaughn Hillyard took his hidden camera into the Oaks, Penn. Eagle Gun Show to purchase two P80 firearm kits from JSD Supply. Those kits, generically called ’80 percenters’ because they require some finishing work by the buyer, were subsequently taken to the Pennsylvania attorney general’s office where they were finished, assembled and actually fired on camera. The report aired on March 17.”

However, that series of events raised questions about the possibility of violations of multiple laws, the foundation said.

The foundation explained the concerns first were raised by journalist John Crump, who reported at AmmoLand, that “The news crew transferred two complete ‘readily convertible’ kits out of the parts they purchased separately at the show. The Bureau of Alcohol, Tobacco, Firearms, and Explosives (ATF) previously viewed ‘buy, build, shoot’ kits as readily convertible and, therefore, a firearm…If the ATF still keeps to that definition, Hillyard, an out-of-state resident, transferred two ‘readily convertible’ firearms (pistols) kits illegally to the Pennsylvania AG’s employees to complete. There is not an exception in the law for any AG’s ‘special agents,’ which means that the agents must obey all laws.”

Now the SAF has revealed that State House Speaker Bryan D. Cutler has advised that he is “reviewing all allowable actions at the disposal of the general assembly” in reaction to a call for an investigation.

Cutler said the matter could be referred to the House Government Oversight Committee, or SAF could also pursue action from the U.S. Department of Justice, because it involves alleged violation of federal gun laws, SAF reported.

“At present,” Cutler confirmed, “I am reviewing all allowable actions at the disposal of the general assembly regarding this issue. Again, I want to thank you for bringing this important issue to my attention.”

Explained Alan M. Gottlieb, the founder of the SAF, “We’re delighted that Speaker Cutler is taking this matter seriously. When this apparent ‘sting’ was first brought to our attention, we were stunned that anyone from a responsible news organization would try for such sensationalism. Only a full investigation can determine whether, and to what degree, state and federal laws were violated.”

The NBC report aired on March 17.

“Just because you’re a reporter, you do not enjoy any special privilege to violate the law,” Gottlieb noted. “We’re indebted to Speaker Cutler for outlining the authority, and the limitations, of the House of Representatives when it comes to investigations, and especially for providing other options that are available.

“We certainly intend to pursue this matter, wherever the path takes us,” he said. “This kind of nonsense may look good during a news broadcast, but the glimmer wears off fast if there is a criminal violation that may be prosecuted.”

Crump had pointed out that the news crew transferred “two complete ‘readily convertible’ kits out of the parts they purchased separately,” which the BATF previously has considered a “firearm.”

He continued, “”AmmoLand News believes that the guns might have been completed in Philadelphia. Philadelphia Ordinance – Chapter 10-2002 of The Philadelphia Code makes it illegal to ‘convert an unfinished frame or receiver into a finished firearm.’”

Further, “If the AG’s office returned the firearms to Hillyard, then the AG’s office would be breaking state law,” which “requires a transfer through an FFL and the transferee’s background to be run through PICS (PA equivalent of NICS),” he said.

Hillyard also apparently is a resident of another state, so state officials would have violated state and federal law by transferring a firearm to an out-of-state resident and “Hillyard and the NBC team would be guilty of multiple federal felonies and gun crimes.”