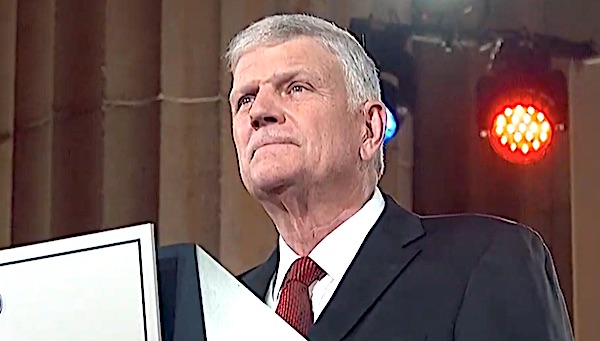 It’s an issue that’s already been resolved by the courts in the United Kingdom, but still one mayor where Samaritan’s Purse chief Franklin Graham is scheduled to speak in coming weeks is insisting that a local bus company remove ads promoting the event.

That’s even though that every issue already has been through the nation’s courts – and the ruling supported the posting of the ads.

Graham is to speak at the Liverpool Exhibition Centre on May 14 as a part of the Billy Graham Evangelistic Association’s “God Loves You Tour UK.”

Rotheram has claimed that Graham is a “hate preacher” because of his biblical beliefs regarding marriage – it should be between a man and a woman – and his criticism of Islamic extremism, which sometimes executes people simply for leaving Islam.

Rotherham claimed, in a statement to the BBC, that, “To say that I’m angry that the views of a known hate preacher—who has an appalling track record of homophobic and Islamophobic views—are being displayed anywhere in our city region would be an understatement.”

The ads say, “Looking for something more?” and promote the date and location of the event.

But Rotherham ordered the Stagecoach and Arriva bus firms to remove the ads, immediately.

In the report, Arriva Bus UK said the ads meet the required standards, so they were posted.

“Acceptance of any advertising is not an endorsement of any products, organizations or the views they represent,” an official for Stagecoach said.

The report explained it was back in 2018 when Graham was to appear that the Blackpool Borough Council and Blackpool Transport Services censored similar ads.

A court ruling in 2021 found those organizations illegally discriminated against Graham by taking that action.

“The bus adverts for Rev. Graham’s evangelistic event in Blackpool were confirmed by the court to be inoffensive and the judge observed that the approach taken by the Blackpool Borough Council was ‘the antithesis of how a public authority should behave in a democratic society,’” a BGEA official previously told The Christian Post.

Also, over the last few years, Graham has had to deal with contracts for the use of various facilities being canceled because of the managers’ anti-Christian bias.

WND reported that Graham noted that not only would his tour go on, he likely would end up in venues bigger than the ones originally planned.

The association also noted it was taking appropriate action when facilities breached their contracts.

WND reported in 2020 that all of the venues in the United Kingdom scheduled to host Graham, son of the late Billy Graham, canceled their agreements to hold his events because of the evangelist’s biblically based views on human sexuality and marriage.

At the time, Nick Forbes, a Newcastle council leader, complained, “Pastor Graham peddles controversial, repulsive views about LGBT people which are in direct conflict with the values we hold dear in Newcastle.”

Other cancellations at the time came in from Birmingham, Newport, Glasgow, Milton Keynes, Sheffield and Liverpool.

At the time, Graham explained, “I believe the Bible teaches that marriage is between a man and a woman. That’s the Church of England’s position. I think Her Majesty the Queen, that’s her position and it’s the position of the church, pretty much worldwide. This is what the Bible teaches and that’s what I believe.”