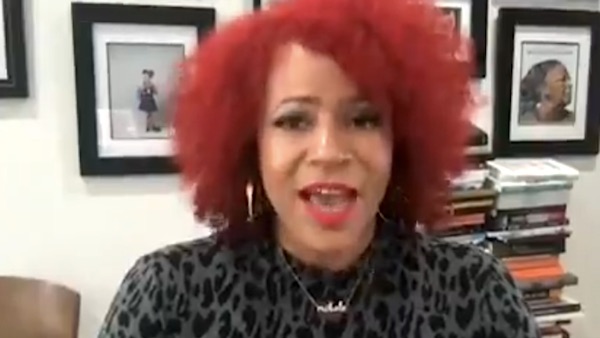 New York Times writer Nikole Hannah-Jones, who is famous for her promotion of her history-editing “1619 Project” that has been condemned by scholars, is now in trouble for doxxing another reporter, Aaron Sibarium of the Washington Free Beacon.

That’s the process of posting another person’s contact information online without their permission.

And it is a huge violation of Twitter’s terms of service.

Fox News reports Hannah-Jones posted on that social-media platform an email from Sibarium that included his personal contact information.

He had contacted her to ask about a comment on the newspaper’s latest internal “drama,” as Fox described it.

He had wanted a response to questions about “tweets where she used the ‘n-word,’ in spite of the newspaper’s own, apparently shifting guidelines against every using such racially charged language, regardless of context,” the report said.

The dispute arose because the Times recently ousted longtime science writer Don McNeil Jr. after he was outed as having used the n-word in the context of a student asking whether a classmate should have been suspended for using the n-word.

In his response, McNeil reportedly “uttered the offending syllables himself.”

Hannah-Jones, in a posting that included, “@aaronsibarium is apparently trying to scour Black NYT employees Twitter accounts to find them using the N-word in response to Don McNeil’s resignation, which is asinine on its face but also, homie, I don’t use the N-word causually [sic] so this is all he came up with. Keep trying tho,” distributed Sibarium’s phone number to more than 518,000 followers.

Later, she deleted it.

But Sibarium got upward of 20 messages including one calling him a “racist piece of s***,” after the posting, he told Fox.

She’s already said destroying property is “not violence” and said there was a difference between “politically black” and “racially black.”

Historians have unleashed a tidal wave of criticism of her “1619 Project,” for which a Pulitzer Prize was awarded, for “pushing a misleading narrative about the ties of slavery to the American Revolution” and other inaccuracies, Fox said.

Hannah-Jones use of the epithet reportedly came in a 2016 statement that referenced a black comedian’s routine.

Morrissey noted, “Doxxing another reporter over a reportorial inquiry should itself be a firing offense, especially after hearing over the last four years how dangerous their occupation had become under Donald Trump.”

At the Twitchy site, a commentary said, “As for the New York Times, their name hasn’t been synonymous with real journalism in a long time, and clearly they’re not interested in fixing that.”

Commentator Ben Shapiro added that Hannah-Jones “is a joke, and the newspaper for which she works has blown out its decency and credibility.”