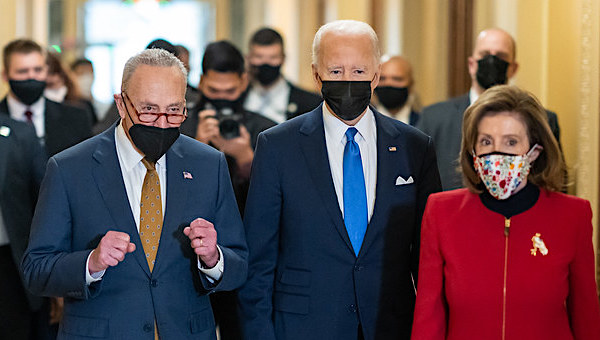 Call it what you will – the “imperial presidency” or the “administrative state” – the power that the executive branch has accumulated over many decades is coming face to face with the Constitution, thanks to the Supreme Court’s originalist wing.

Associate Justices Clarence Thomas, Samuel Alito and Neil Gorsuch, in particular, have signaled in several significant opinions this term that they want to restore powers to Congress that the executive branch has usurped, reports Axios.

Ultimately, it appears they want the court to return to the “nondelegation doctrine,” the theory that the Constitution prohibits Congress from delegating any of its powers to the executive branch.

Axios points to Gorsuch’s opinion in the court’s ruling last month that OSHA did not have the power to mandate COVID-19 vaccination in workplaces. Joined by Thomas and Alito, Gorsuch wrote that even if Congress had expressly given OSHA the power to impose a vaccine mandate, that delegation of power likely would have been unconstitutional.

Axios observed that battles over the federal government’s power will likely define much of the conservative Supreme Court’s future.

The OSHA ruling is one of three recent rulings that, together, have a dramatic impact on constraining federal power across many policy areas in ways that are nearly impossible to reverse.

Two other significant rulings last month were the curbing of the Environmental Protection Agency’s power to control greenhouse gas emissions and the prevention of the Centers for Disease Control and Prevention’s from imposing a housing eviction moratorium due to COVID.

Axis said: “There are many ways for the conservative court to rein in federal agencies, and while there may not be a clear consensus on precisely which of those avenues to take at any given moment, one way or another, federal agencies exerting broad-based powers are already losing — and are almost certainly going to keep losing.”

It’s clear, Axios said, that the court is headed in a direction in which “the federal government is going to be able to do a lot less than it has been able to do in the past.”

In the EPA case, the court expressed skepticism about a doctrine currently in use called the “Chevron deference.” It holds that if a particular law isn’t inherently clear, the courts defer to the interpretation of the the executive-branch agency assigned to implement the law.

Instead of the Chevron defense, the court in the three recent cases relied on a legal test known as the “major questions” doctrine.

Simply, it holds that executive-branch agencies cannot justify sweeping actions by relying on the general authority they have received from Congress.

In the CDC case, for example, the court said that if Congress had intended for the agency to have the power to halt evictions nationwide, it would have needed to say so explicitly.

The “nondelegation doctrine, Axios said, is the “outer bound” of this campaign by the conservative justices to restore the constitutional separation of powers. It goes even further than the “major questions” doctrine by preventing Congress from delegating to the executive branch any of the powers the Constitution gives to Congress alone.

Are you able to help WND continue to forge ahead in our 26th year? There are several ways to help, some of which won’t cost you a nickel.