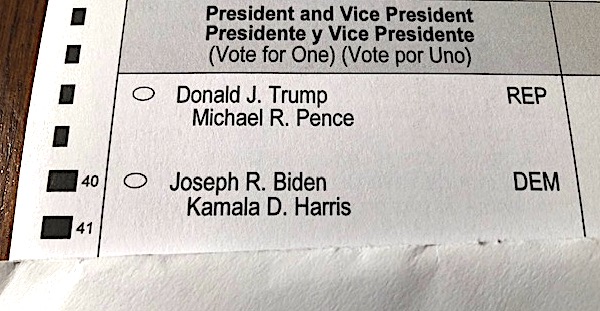 Even Democrats believe there was voter fraud in the 2020 presidential election, according to a commentary from John R. Lott Jr., formerly the senior adviser for research and statistics at the DOJ’s Office of Legal Policy and now the president of Crime Prevention Research Center.

“By a margin of 52% to 40%, voters believe that ‘cheating affected the outcome of the 2020 U.S. presidential election.’ That’s per a Rasmussen Reports survey from this month. This stands in stark contrast to the countless news stories editorializing about ‘no evidence of voter fraud’ and ‘the myth of voter fraud,’” he wrote.

He said his own peer-reviewed research to be published in Public Choice confirms evidence of “around 255,000 excess votes (possibly as many as 368,000) for Joe Biden in six swing states where Donald Trump lodged accusations of fraud. Biden only carried these states – Arizona, Georgia, Michigan, Nevada, Pennsylvania, and Wisconsin – by a total of 313,253 votes. Excluding Michigan, the gap was 159,065.”

He explained his point isn’t to “contest” the election results, “but to point out that we have a real problem that needs to be dealt with. Americans must have confidence in future elections.”

What is known about the 2020 election is that a Media Research Center study asked voters about the conspiracy involving legacy and social media behemoths to conceal accurate reporting, just before the election – of a laptop computer that revealed scandalous behavior on the part of the Bidens in their overseas business operations.

It found had more people known about that, they would have withheld their support from Joe Biden and he would have lost.

Further, an analysis revealed that the $420 million Mark Zuckerberg handed over to local election officials – often with instructions to recruit voters from Democrat districts – also likely “bought” the election for Biden.

And then there’s the local and state elections officials who simply ignored their own state laws regarding ballots in the election, favoring mail-in ballots that went heavily for Biden.

Lott wrote, “Courts have rejected challenges to the 2020 presidential vote, generally citing the lack of evidence that any alleged fraud would have altered the outcome in a particular state. The Republican plaintiffs argued that since their observers couldn’t watch the vote counts or were prevented from seeing other evidence, they couldn’t provide such proof without investigations backed by subpoena power. Still, while some judges have agreed that irregularities occurred in 2020, they weren’t willing to grant discovery in the absence of evidence that fraud could reverse the election results. Republicans thus faced a Catch-22 situation.”

He explained recounts have solved nothing since they merely involved looking at the same “potentially fraudulent” ballots again. And, “Signature verification is far from perfect, as election employees have as little as five seconds to check a signature.”

He said his own research “My research provides three tests of vote fraud.”

“First, I compared precincts in a county with alleged fraud to adjacent, similar precincts in neighboring counties with no fraud allegations. Precincts tend to be small, homogeneous areas, and many consist of fewer than a thousand registered voters. When comparing President Trump’s absentee ballot vote shares among these adjacent precincts, I accounted for differences in Trump’s in-person vote share and in registered voters’ demographics in both precincts.”

He said, “While precincts count in-person votes, central county offices are responsible for counting absentee or mail-in ballots. A county with systemic fraud may count absentee or mail-in ballots differently from a neighboring county. We can try to detect this fraud by comparing the results in bordering precincts that happen to fall on opposite sides of a county line. These precincts will tend to be virtually identical to each other – voters may simply be on the other side of the street from their precinct neighbors.”

His work uncovered the fact that, “In 2016, there was no unexplained gap in absentee ballot counts. But 2020 was a different story. Just in Fulton County, Georgia, my test yielded an unexplained 17,000 votes – 32% more than Biden’s margin over Trump in the entire state.”

Then, he said, “I applied the same method to provisional ballots in Allegheny County, Pennsylvania. Contrary to state law, voters were allegedly allowed to correct defects in absentee ballots by submitting provisional ballots on Election Day. My analysis found that such permissions in Allegheny County alone contributed to a statistically significant 6,700 additional votes for Biden – in a state decided by fewer than 81,000 votes.”

Finally, he said, “Artificially large voter turnouts can also be a sign of vote fraud. This fraud could come in the form of filling out absentee ballots for people who didn’t vote, voting by ineligible people, or bribing people for their votes.”

“Republican-leaning swing state counties had higher turnouts relative to the 2016 election. Democratic-leaning counties had lower turnouts, except for the Democratic counties with alleged vote fraud, which had very high turnouts,” he said. “My estimates likely understate the true amount of fraud with absentee ballots, as I didn’t attempt to ascertain possible in-person voting fraud. Allegations have arisen of many ineligible in-person voters in Georgia, Nevada, Pennsylvania, and Wisconsin. In Fulton County, Georgia, 2,423 voters were not listed as registered on the state’s records, and 2,560 felons voted even though they had not completed their sentences.”

He warned, compared to developed nations, “America is unique in its lax approach to vote fraud.”