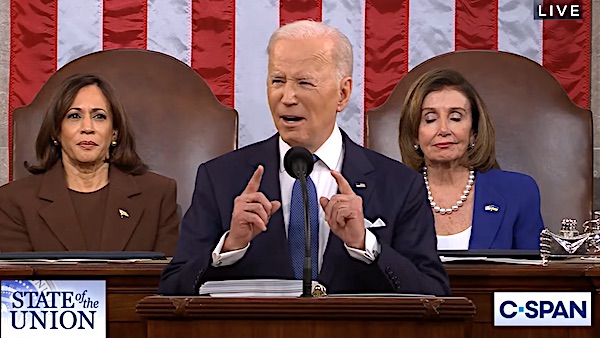 Tuesday night’s State of the Union address by Joe Biden fulfilled all the expectations of those watching what has developed into his bizarre presidency, with his gaffe in calling Ukrainians “Iranians,” House Speaker Nancy Pelosi grinding her teeth and jumping to her feet to rub her knuckles together, and Colorado Rep. Lauren Boebert interrupting to point out that Biden put 13 American service members in their coffins in his disastrous Afghanistan pullout.

There was criticism of Kamala Harris’ fashion sense, as she wore a brown outfit which blended in with the brown leather chair on which she was seated, Democrat Rep. Joe Manchin sat with the Republican side of Congress, and more.

Could have been better delivered in a letter, according to a house editorial in the Washington Examiner.

“Apart from a brief introduction touching on recent events in Ukraine, almost all of Biden’s address could have been pulled from any boilerplate Democratic campaign speech delivered in the past two decades,” it said, pointing out he ignored his own administration’s failure on the southern border, “returned” to the Democrats failed playbook on energy, and lied when he said former President Trump’s tax cuts only “benefited the top 1% of Americans.”

“As the nonpartisan Tax Foundation has ably demonstrated, both low- and middle-income earners saw significant benefits from the Trump tax cuts. The only taxpayers who did see their bills rise were high-income earners from predominantly Democratic states who were hit by the new cap on deductions for state and local tax payments,” the editorial said.

It said he recycled old comments about crime, but failed to mention “the far-left prosecutors in Democratic cities who have been busy releasing repeat violent criminals onto our streets so that they can commit additional murders.”

The commentary said, “What Biden needed last night was a course correction. His lazy, mail-it-in State of the Union wasn’t that.”

Her activity “had some asking if she was ‘on drugs’ or ‘drunk,’” the report said.

The 81-year-old behaved erratically throughout, jumping up and rubbing her knuckles in glee after Biden spoke of soldiers breathing in toxic air at one point.”

It was Pelosi who infamously stood up as President Trump finished his last State of the Union two years ago to publicly rip up the copy of the government document she had been given to follow along.

Biden didn’t disappoint those who watch his speeches to see his latest flub – a common occurrence when he addresses anyone. He said, of Vladimir Putin’s attack on Ukraine, “He’ll never gain the hearts and souls of the Iranian people,” when he should have said Ukrainian people.

Sen. Ted Cruz, R-Texas, cited the “State of the Union miracle,” in commenting on the fact the Biden administration lifted the mask mandate in Congress just in time for the speech.

GOP Rep. Lauren Boebert interrupted Biden when he was talking about service members being put in coffins by cancer from exposure to burn pits, pointing out his actions put 13 service members in their coffins during Biden’s catastrophic pullout from Afghanistan.

He pointed out Biden, 79, showed signs of “a steep mental decline.”

“Biden’s speech, Hannity said, was ‘filled with smoke and mirrors’ and ‘detached from reality,’” the Daily Mail said.

“You might’ve noticed something interesting. Biden did not mention any accomplishments. None whatsoever. Because there are none,” he said.

Biden pushed gun control and transgender ideology – both old Democrat Party staples, and several commenters pointed out Biden took America from being energy independent to being dependent on oil deliveries from Russia – with payments essentially funding that nation’s war on Ukraine.

“He needs to stop the U.S. from buying Russian oil that is helping to fund the killing of Ukrainian citizens, and he could do that by balancing that with rolling back his restrictions and impediments to oil production in the U.S. that he had imposed when he became president — it may not be a perfect balance, but at least it would help ameliorate the hurt we would feel from not getting that oil from Russia,” said Rep. John Katko, a New York Republican.

“With the oil we’re importing from Russia now, it’s given Putin $75 million a day, and we’ve been doing that for a while now. We’ve gone from being energy independent to now being dependent on other countries. I think that bolstered his [Putin’s] war chest,” he said.

Even leftists were unhappy, with Rep. Cori Bush, a Missouri Democrat, charging, “With all due respect, Mr. President. You didn’t mention saving black lives once in this speech. All our country has done is given more funding to police. The result? 2021 set a record for fatal police shootings. Defund the police. Invest in our communities.”

The Republican response was from Iowa Gov. Kim Reynolds, who blistered Biden for creating economic headwinds for Americans with his rising inflation and allowing a surge in crime.

“Instead of moving America forward, it feels like President Biden and his party have sent us back in time to the late ‘70s and early ‘80s. When runaway inflation was hammering families, a violent crime wave was crashing on our cities, and the Soviet army was trying to redraw the world map,” she said. “Even before taking the oath of office, the president told us that he wanted to ‘make America respected around the world again and to unite us here at home.’ He’s failed on both fronts.”

The Democrats, apparently unsure of Biden’s ability to express their messaging, also lined up their own rebuttals to their own president.

Iowa Gov. Kim Reynolds: “Weakness on the world stage has a cost and the president’s approach to foreign policy has consistently been too little too late.” #SOTU #SOTU2022 pic.twitter.com/ar9BnSgLJj