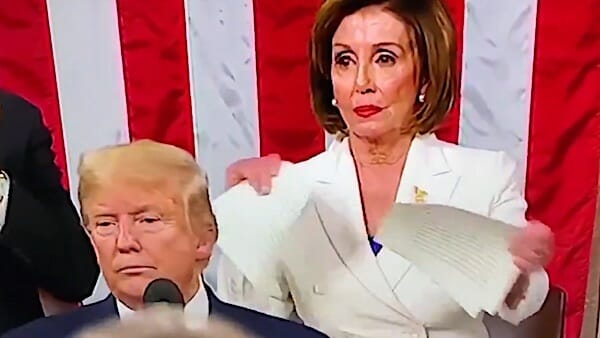 Helping the poor? The Bible is clear. On the environment? Same answer.

On abortion, however, she’s in open defiance of Catholic Church teachings and, in fact, she has decided she is the one to decide what she believes on the topic, not the church.

And now she’s decided she’ll determine who should be forgiven, and for what.

Specifically, she has stated she’ll never forgive President Trump, his “lackeys” and his “bullies” for last January 6.

That’s when Trump held a rally in Washington, and hundreds of attendees marched to the Capitol.

A relatively small number got out of hand, entered the building and vandalized it.

Many of them, accused of crimes like trespassing, still are held in Washington jails without access to court hearings or lawyers.

In fact, there has been evidence that security officers sometimes opened the doors for the protesters, even holding doors while they entered.

Now, the Hill reports, she has decided she is the one to decide who is forgiven on that topic.

And it won’t be Trump.

“I’ll never forgive president — former president of the United States and his lackeys and his bullies that he sent to the Capitol for the trauma that he — that wasn’t what was exerted on our staff,” she said. “These are young, largely younger people who come with the idealism to work in the Capitol on either side of the aisle and whatever it is. And for us to sign up for this when we run for office, it’s bad enough for our families to see the danger we’re in.”

The January 6 events prompted Pelosi’s second attempt to impeach and remove the president, which failed like the first.

The Independent reported she did not fault anyone for failing to predict the events of that day, and accused Trump of inciting “an insurrection,” even though those arrested have not been charged with insurrection.

She has appointed a partisan congressional committee to look at the events of that day and report. She refused to allow the GOP to appoint its own members, and she instead selected who Republican members who have clashed with and vigorously opposed President Trump.