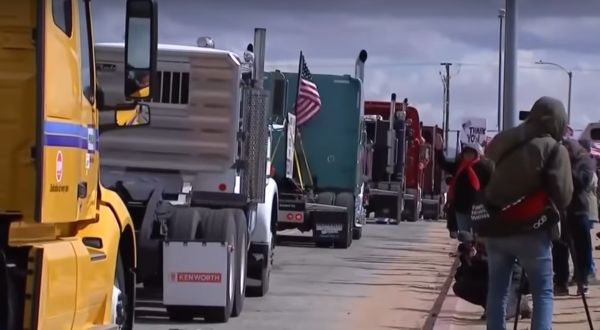 U.S. truckers, in their People’s Convoy, on Friday reached a mass of trucks and other vehicles eight miles long, and have raised some $850,000 to support their nationwide protest of vaccine and mask mandates.

Their goal, with convoys coming from different parts of the nation, is to converge of Washington, D.C.

The Daily Mail said the People’s Convoy part of the nationwide campaign, was on I-40 in New Mexico, headed to Texas.

“The truckers have called on President Joe Biden to end the National Emergency and to lift all COVID-19 vaccine and mask mandates, despite most states already having started to roll them back,” the publication explained.

The drivers intend to be in the Washington area by March 5, and some parts of the protest convoys could be on hand earlier to protest during Joe Biden’s State of the Union. Motorcades actually are coming for several dozen points.

The American protest was inspired by the Freedom Convoy in Canada, which started out small on the West Coast, earning the derisive label as a “fringe” group, according to Prime Minister Justin Trudeau. It eventually eventually clogged Ottawa’s streets and convinced several provinces to drop their mandates.

U.S. governors and mayors have been lifting their vaccine and mask requirements rapidly in recent days, as the 2022 midterm election campaigns are getting under way.

The Pentagon and Washington officials have assembled some 1,200 officers and soldiers to be on hand for the arrivals. One convoy leader, Bob Bolus, is bringing a small contingent from Pennsylvania and has said he’d like to shut down the Washington Beltway.

But leaders have said their intentions are all legal.

“A lot of people have asked why we’re doing this – what’s your reason behind it. People want a defined, clear answer. They think it’s one thing,” Brian Brase, who with others left from California earlier this week, said in the Mail report.

In New Mexico, residents held signs and saved American flags from overpasses as the trucks, and accompanying other vehicles, passed underneath.

Kris Young, the report said, was running the group’s Facebook page, and posted, “We want to thank every one of you for your support. The welcoming on the Arizona overpasses and at Great American Pizza yesterday was absolutely amazing!!”

Leftists across the country have tried to undermine the group by saying the protests are about other issues, too, fulfilling a prediction made by several that the truckers would be demonized as they were in Canada.

U.S. Defense Secretary Lloyd Austin already has approved deploying of 700 National Guardsmen as well as 50 “large tactical vehicles” to be stationed in Washington.

City officials are reinstalling a fence around the Capitol complex.

WND reported just a day earlier that spokesman Pat Callahan of the New Jersey State Police threatened that truckers, if they stopped, would be towed – much as Trudeau did to the truckers in Ottawa.

“It’s one thing to rally and travel on our interstates to get to a certain rally point,” Callahan said. “Where they go when they leave New Jersey is obviously up to them. I would hope that we don’t have to use our heavy-duty wreckers. If they come to a stop they will be ordered to keep moving, but we are planning for scenarios where we would have heavy-duty wreckers standing by to tow them at their expense off of our interstates.”

In Canada, Trudeau declared a national emergency to use violence against truckers, arresting hundreds and confiscating trucks.