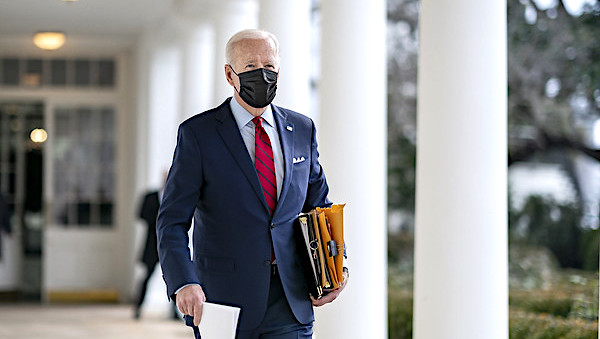 Constitutional expert Jonathan Turley is explaining in an online column that President Biden, for the second time in just days, appears to be advocating illegal actions.

“There was a great deal of criticism of President Joe Biden’s press conference from his refusal to take questions on the Afghanistan situation to his calling for the use of civil rights laws to oppose any state laws barring mask mandates,” Turley wrote. “One line however received little attention but contained a breathtaking and troubling pledge: ‘If a governor wants to cut the pay of the hard-working education leader who requires masks in a classroom, the money from the American rescue plan can be used to pay that person’s salary 100%.’ With that line, Biden pledged to indemnify people who violate state laws, including orders upheld by the courts.”

Biden earlier was blasted by many for his insistence on a new moratorium on evictions because of COVID-19, a move even the Supreme Court said he did not have authority to make.

Many observers were stunned that Biden appeared to admit his actions were illegal, but he was taking that course anyway in the hope of getting as much money as possible spent on the program before the courts could halt him.

The new dispute is over his insistence on having his own way with mask rules.

“Biden’s call to use civil rights laws to challenge anti-mask mandates was itself controversial. Indeed, it could create another major loss for the administration. The administration racked up an impression array string of losses by the first six months in court. That dubious record has continued. In states with anti-mask mandates, the states are making a public health decision. Such decisions (like those made by the CDC) are generally afforded great deference from the courts. These states believe that the health and educational costs for children outweigh the risks for the virus. Many disagree with that judgment but it is a policy that applies to all children and families equally. That makes this a tough case to win,” Turley wrote.

“Yet, that was not the promise that stood out in the press conference. Indeed, I assumed that I had misheard Biden in promising to pay teacher salaries and waited for transcripts. What the president is saying is that the federal government will indemnify teachers who knowingly violate state laws. I cannot recall any such prior presidential pledge to subsidize unlawful conduct and it raises serious questions over the use of federal funds to encourage violations of lawful state orders. Again, many disagree with these orders but they are issued under state laws affording governors this power.”

Turley pointed out Biden’s blanket pledge does have some problems, including that it is unclear where the money would be found to do the president’s bidding.

“Biden may be suggesting that districts that received the money for school expenses and programs could use them for funding defiant teachers. Alternatively, there might be money available through the Department of Education,” he wrote.

The commentary pointed out that Biden failed to outline any practical limits – “He just told teachers to defy their state while assuring them that any lost wages will be indemnified. What if a teacher is suspended? Biden just promised to cover potentially years of lost wages. What if the teacher is fired? Will the federal government effectively pay a pension? Indeed, this pledge could create a perverse incentive for states to move to dock or suspend pay to pass such costs to the federal government.”

But Turley noted Biden isn’t alone in advocating illegal behavior, as “Democrats in Washington have lionized Texas legislators who fled the state to prevent the passage of election reforms. These same Democrats have denounced the filibuster to block bills as a denial of democracy in Washington. The Texas order for the arrest of the legislators has been upheld by the Texas Supreme Court.”