Pro-abortion forces threaten to 'unleash hell' on America over Roe 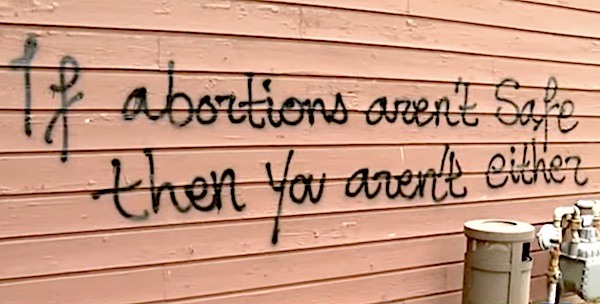 A pro-abortion force that allegedly already has been involved in vandalizing pro-life centers across the nation has posted online its threat to “unleash hell” on America if, as expected, the Supreme Court overturns Roe v. Wade.

That would not outlaw abortion, but it would return regulation of the nation’s profitable abortion industry to the states, some of which already have limits prepared for such a decision.

That ruling is expected over the next few days, and if a leaked copy of a draft majority opinion was accurate, the justices will toss the 1973 law that even its author confessed had serious problems.

Now it is the group called Jane’s Revenge that has posted on The Anarchist Library its plans to “get angry” and make the nation “feel our full wrath.”

Titled a “Night of Rage,” the organization posted just weeks ago its warning that overturning Roe would be “an event that should inspire rage in millions of people.”

“We need to get angry,” the organization proclaims. “We need the state to feel our full wrath.”

“We need to express this madness fully and with ferocity. We need to quit containing ourselves. We need them to be afraid of us.”

The statement continued, “We cannot sit idly by anymore while our anger is yet again channeled into Democratic party fundraisers and peace parades with the police. We were even told we must cooperate with them because they work alongside abortion providers and clinic escorts…a group of people who, at this moment in time, cannot possibly risk their lives or their livelihoods any further than they already are. ”

That “fury” needs to be expressed “physically,” the organization demanded.

When that decision is announced, the group said, pro-abortion activists should “do what you can to make your anger known.”

A report at Breitbart described Jane’s Revenge as a “radical pro-abortion group.”

The manifesto also threatens, “To those who work to oppress us: If abortion isn’t safe, you aren’t either. We are everywhere.”