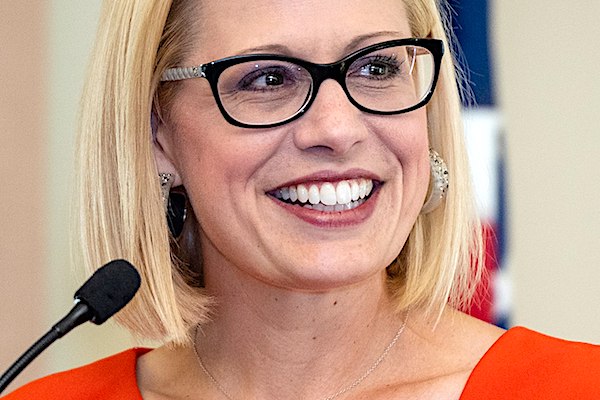 Protesters took video of their confrontation with Sen. Kyrsten Sinema – inside a women’s restroom at Arizona State University where she teaches – as they demanded the Arizona Democrat give them a “pathway to citizenship.”

“We knocked on doors for you to get you elected. Just how we got you elected, we can get you out of office if you don’t support what you promised us,” one of the activists told Sinema in the video that was recorded with a phone, according to a report from Fox News.

The report explained they confronted Sinema, who has been one of a small handful of Democrat senators unwilling to rubber stamp what programs and spending extremists in Washington propose, in her classroom, then followed her into the restroom.

Protesters followed Sen. Sinema into the bathroom at Arizona State University to confront her on Build Back Better and immigration pic.twitter.com/NDSmeu0h2M

A problem that could come up for the activists, however, is that a commentary at Twitchy explained the activists’ actions are illegal in Arizona, where one is not allowed to video record another person in a restroom without permission.

This is illegal in Arizona.https://t.co/AeY2pP9o0f

The commentary explained the protesters were demanding she vote for President Joe Biden’s “Build Back Better” agenda and protect illegal aliens in the country.

The protesters later blamed Sinema for their actions, with one commenting, “We wouldn’t have to resort to confronting @senatorsinema around Phx if she took meetings with the communities that elected her. She’s been completely inaccessible. We’re sick of the political games, stop playing with our lives.”

The commentary said, “One MAJOR problem for the protesters is Arizona has a law against videotaping a person inside a bathroom without their consent.”

One activist is on video claiming, “I was brought here to the United States when I was three years old and in 2010 my grandparents both got deported because of S.B. 1070. And I’m here because I definitely believe that we need a pathway to citizenship.”

Fox reported, “The video comes on the same day another group of activists confronted Sen. Joe Manchin at his houseboat in Washington, D.C., demanding the West Virginia Democrat drop his opposition to his party’s $3.5 trillion spending bill.”

Both senators have opposed the legislation for its price, dealing a setback to Democrats who, with only 50 senators and Kamala Harris in their Senate majority, cannot afford a single lost vote if they are to move Biden’s extremist plans forward.