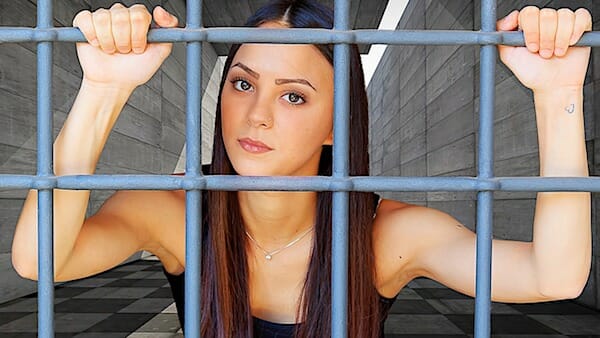 In a scenario that easily could fit the old saying about having inmates running the asylum, the American prison industry has begun allowing men to simply call themselves women, and then serve their prison sentence with women.

The agenda already is imposing its requirements on California officials, and now there’s legislation in Maryland that would copy that plan.

And the House in Washington state is working on a proposal on the same fight: men, sometimes violent, being housed with women.

Just the News has documented that the program already is in operation along the West coast, and now the East is joining in.

The Maryland plan would let inmates choose their correctional facility facility based on their own claims about what gender they are, and a purported draft executive order from Joe Biden would order the same for federal facilities.

“One chamber of the Washington State Legislature recently approved the nuclear option to deal with ongoing scrutiny of its transgender transfers: hiding basic information about male inmates, including their reported assaults on women, from the public,” the report said.

The report cited the work of a group called the Women’s Liberation Front in the movement.

Legal director Lauren Adams told Just the News there’s been little publicity about its plans, even though the Maryland plan would simply make Maryland prisons coed.

It states, inmates “shall” be housed in men’s or women’s facilities, and bodily searches performed, based on their “preference.” There’s no option to reject a prisoner’s demand based on anatomy.

In California the plan already is in place and has documented that men in women’s prisons already have been attacking women.

“Woman II Woman, an advocacy group run by ex-convicts, claimed female inmates had started ‘sleep schedules so that one woman is always on watch to make sure no one gets raped,’” the report said.

Washington state lawmakers are looking to move even beyond the standard, and are working on a plan to hide from the public any history of attacks or violence.

WND reported in 2020 that a former British prison official warned that male prisoners who “self-identify” as females have been raping women in prisons.

Rory Stewart, a former Tory Cabinet minister, said men should not be given access to women’s facilities.

“The important thing is: I think the rights of women to feel safe trump the rights of somebody who’s biologically male to enter that space,” he said.

Stewart said that when he was prisons minister in 2018-2019, there were “situations of male prisoners self-identifying as females then raping staff in prison.”

At the time, Frances Crook, chief executive of the Howard League for Penal Reform, said it would be “appalling” if “people who have been convicted of sex offenses or offenses against women who then say they’re female then get access to women’s prisons.”

In the United States, Democrats in California have bragged about putting men who call themselves women in women’s jails, and activists have sued to keep details of that agenda secret.

In 2021, officials in California reported “hundreds” of men had requested to be transferred to women’s jails.