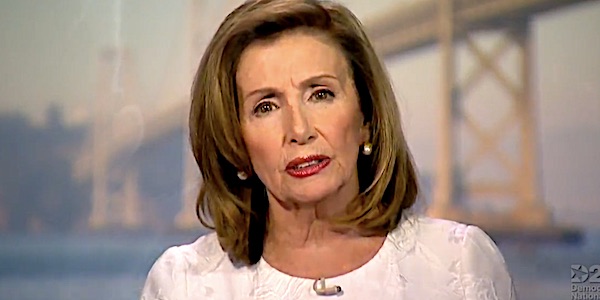 An investigation by the Daily Mail charges that Democrat House Speaker Nancy Pelosi’s son, Paul Pelosi Jr., listed himself as the owner of a “flop house” that has been linked to a fraud and bribery scheme.

The report explained Paul Pelosi Jr. signed documents claiming he was the owner of the property involved in a case investigated by the FBI, and in which San Francisco building inspector Bernie Curran and “permits expeditor” Rodrigo Santos have been indicted.

He signed as the property owner, “the party legally and financially responsible for this proposed construction activity” and agreed to “abide by all applicable laws and requirements that govern Owner-Builders as well as employers,” the report explained.

“They even show Pelosi Jr., 53, applying for one of the very same permits” that the two case defendants have been indicted over, the report said.

The report said it was a “smoking gun” that Pelosi Jr. signed a Dec. 7, 2017, Department of Building Inspection form involved in the case for which Curran and Santos soon are due in federal court.

“DailyMail.com has obtained smoking gun documents that tie him to the fraud and bribery scheme,” the report said.

The background is that prosecutors already have alleged Santos arranged for his clients to “donate thousands of dollars to Curran’s favorite non-profit – a rugby club – in exchange for him turning a blind eye to violations and which would deny their buildings city permits.”

The case documents cite “Client 9” as the person who “wrote a $1,500 check to the club to help remove violations from the squalid ‘residential hotel’ on Utah Street.”

The report confirmed Pelosi Jr. was interviewed by federal investigators in Francisco about a hotel, “which was owned [at that time] by his former girlfriend Karena Apple Feng,” and there already were hints that he was, in fact, “Client 9.”

The new documents “heighten that speculation,” the report said, explaining that texts in the investigation appear to show Santos and Client 9 “brazenly discussing a bribe to Curran’s favorite charity to help grease the permit process.”

The report quotes messages from Santos that said, “I will forward the address to Curran. He will abate it,” and “Please drop off a check payable to Golden Gate Youth (Rugby) Association for $1k. Bernie’s nonprofit.”

Client 9 responded with a picture of a $1,500 check and comment: “Made the donation and it is being sent today.”

The check never was deposited by the club, which is not being accused of any wrongdoing, the report said.

But the court files say Client 9 was working on behalf of the owners of the property in the 1300 block of Utah Street, and there is one permit in the state system signed by Curran for the address, and its number matches the number Pelosi Jr. wrote, the report said.

The property was known for its permit violations, and Curran told the Daily Mail Santos introduced him to Pelosi Jr. as a “friend with whom he went jogging.”

The report also charged an anonymous building inspector told San Francisco’s Mission Local news site in 2018 Pelosi Jr. met with him while trying to “get rid of Notices of Violation” on the 1312-1314 Utah Street property.

One former girlfriend, Nicole Bulick, 46, told Daily Mail that Pelosi Jr. had been interviewed by investigators several times, and Feng, as a former property owner, said she was interviewed about the property.

“Emails and subpoenas for records back up their claims,” the report said.

The Mail said just weeks ago Pelosi Jr. had been linked to five previous federal investigations, and the building violations issue “is the sixth.”

Further, Feng, “who was previously in a romantic relationship with Pelosi Jr., sued him in 2019 claiming he conspired with a now-convicted lawyer and fraudulent realtor to steal the property from her,” the report said.

The case was dismissed on technical grounds.

Pelosi Jr. also reportedly was an officer in the company that owned the building, and sold it.