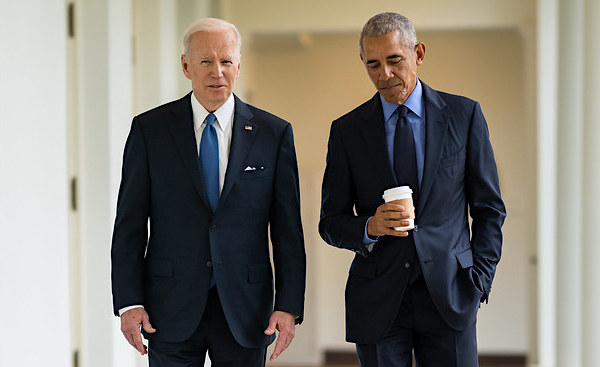 Joe Biden’s impact on America has unfolded in a wide variety of ways since he took office: Inflation has exploded to nearly 9%, fuel prices are in the stratosphere, the southern border leaks illegals like a tissue leaks water, COVID remains a concern, America’s enemies are emboldened and worse.

For many, that all is a result of an incompetent, feeble, near-octogenarian who regularly mixes up his words and loses his train of thought, simply unable to do any better.

Others describe it as a deliberate attack on the nation.

“It makes no sense. That tells you this is intentional.”

Columnist and London Center fellow Deroy Murdock told Just the News, “The wide-open ‘border’ is no accident. It is deliberate. This is not a sign of incompetence. It is a reflection of [Biden’s] relentless, intentional destruction of the southern ‘frontier.’”

Those high fuel prices, triggered by Biden’s cancellation of drilling leases in the Gulf and blocked energy exploration in oil-rich part of Alaska?

Explained the Just the News report, “House Minority Whip Steve Scalise expounded in a recent statement, noting Biden approved a pipeline for Russia but blocked one for America.”

Scalise charged, “It’s not that he’s against all pipelines. As my colleagues have pointed out, he approved Russia’s pipeline, the Nord Stream 2, which builds on top of the Nord Stream 1, which was already supplying Russian oil to parts of Europe. We could have been there to provide all of the oil and gas that Europe needs. And instead, Biden turned off the spigots here and sent leverage to Putin.”

Scalise explained, however, Americans are not so stupid.

“People get this,” he told Just the News. “As [GOP Conference Chair Elise Stefanik] said, ‘The American people are smarter than Joe Biden gives them credit for.’ They know it’s Biden’s policies — anti-American energy policies — that have led to this skyrocketing sticker shock at the pump, where it costs over $150, in some cases, to fill your car.”

It actually was Biden, and Kamala Harris too, who suggested that high fuel prices were just part of their intentional scheme, even though Republicans had been labeled conspiracists when they suggested it first.

Biden admitted, “When it comes to the gas prices, we’re going through an incredible transition that is taking place that, God willing, when it’s over, we’ll be stronger and the world will be stronger and less reliant on fossil fuels.”

And Harris said, “We are all in the midst of a turning point. We have the technology to transition to a zero-emission fleet. Our administration — together, all of us — is working to make that possibility a reality.”

Jordan said that Biden, and Treasury Secretary Janet Yellen, essentially lied to Americans when they claimed inflation was transitory, so Democrats could spend what they wanted.

Jordan explained, “Janet Yellen said this week, ‘We were surprised that we had this kind of inflation. We didn’t really see it coming.’ And I’m like, how could you not see it coming? You spent like crazy. You paid people not to work, and you drove up the cost of energy.”

Yellen’s claims, Jordan said, make clear that what is happening under Biden “is intentional.”