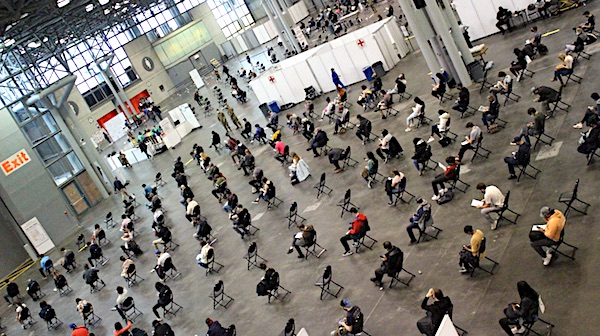 Multiple members of the Republican Party are considering a government shutdown just weeks from now when the feds will need to have more money authorized – if the Democrats insist on continuing their failing agenda of COVID-19 shot mandates.

The Supreme Court recently handed Joe Biden a huge defeat by blocking a mandate the Oval Office had intended to force tens of millions of workers to take the experimental jabs.

Now Fox News Digital reports it has obtained a copy of a letter that is making the rounds in Washington that contemplates not giving the government more money to operate unless those mandate programs are excluded.

The network said the letter it obtained is being signed “by a growing number of Republicans, led by Rep. Chip Roy of Texas, pledging to pull support from government funding legislation that includes language giving funds for vaccine mandates.”

The current funding mechanism for the federal government expires in the middle of next month, meaning that Democrat majorities in Congress will have to come up with another plan – likely a continuing resolution – that authorizes the money the government needs.

Fox News Digital reported Roy confirmed he and others are “going to find out” whether the Republicans will “unite” and “pledge not to fund these mandates.” The government has operated for years mostly on continuing resolutions that maintain status quo funding because of the deep divisions in Congress that make adopting a longer term budget unlikely.

“Most Republicans say that vax mandates are tyrannical and foolish, but will they unite before government funding expires on Feb. 18 to pledge not to fund enforcement of these mandates?” Roy explained in the report. “Will at least 10 of the 19 GOP senators who voted to punt last time now stand up for health care workers or not? We’re going to find out.”

The letter, according to the report, explains to House Minority Leader Kevin McCarthy, R-Calif., and Senate Minority Leader Mitch McConnell, R-Ky., the GOP “must once again decide whether they will vote to fund a federal government that is enforcing tyrannical COVID-19 vaccine mandates on the American people.”

It cites both cities and states that rely on federal money and points out Biden has arbitrarily demanded at least five COVID-19 shot mandates for medical workers, the military, federal workers and government contractors. His strategy to impose that on tens of millions of workers through a “work-around” OSHA rule was halted by the Supreme Court.

The letter states, “We the undersigned refuse to consider supporting any federal government funding vehicle, be it a continuing resolution or an omnibus appropriations measure, that funds the enforcement of COVID-19 vaccine mandates at any level of government.”

The report said the letter is moving around the Hill in advance of the Feb. 18 funding deadline.

There are already over a dozen signers, the report said.

On his own website, Roy explains the further need to rein in spending:

“Stop funding these bureaucrats. Every time a Republican votes to support our continuing resolutions and our funding bills, they’re voting to fund that FBI. They’re voting to fund that Department of Education and its 40 billion dollars to schools to teach our children that America’s evil. They’re voting to fund the Secretary and his $220,000 salary at DHS to willfully disregard our laws. Stop doing that. Stop funding DOD’s stupid indoctrination camps where we’re more concerned about SOGI woke diversity nonsense. We should fire every single one of these diversity officers. We should fire 20% of bureaucrats right off the gate in the first month that we’re in power.”

The comments came from Roy’s appearance on I’m Right with Jesse Kelly, where he also addressed other issues.

Democrats, he said, “don’t have any interest in securing the border. That’s the simple reality. She [Kamala Harris], the president, and importantly Secretary Mayorkas are purposefully ignoring the laws at the border…They are purposefully doing this and purposefully failing to enforce the laws.”

He said every Republican needs to “stop being a wet noodle loser and stand up and impeach Secretary Mayorkas, now. He should be impeached. He is endangering Americans. Americans are dying because of his action.”