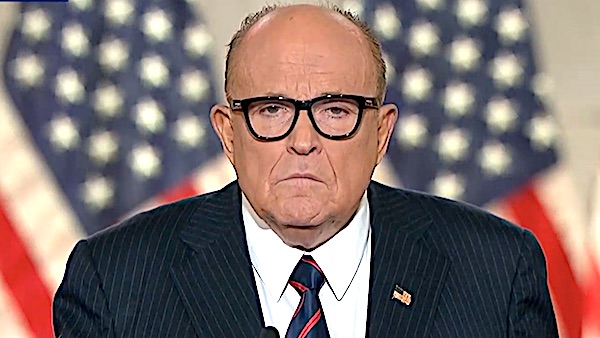 Andrew Giuliani, the son of former New York mayor and President Trump lawyer Rudy Giuliani, says the federal agents’ raid on his father’s home and office show that the government can now target anyone.

“When federal agents raided my father’s home at dawn Thursday morning, the Biden Justice Department was sending a clear message to America: If it can happen to the former mayor who led New York City through 9/11, it can happen to you, too,” he said in a Washington Examiner commentary.

“During Joseph Stalin’s reign in the Soviet Union, the dictator staged the Moscow Trials, which put prominent members of his political opposition on trial. Denied any kind of due process, most of the defendants were charged with crimes against the Soviet government. Several were sentenced to death. These show trials, which often centered on the defendants’ collusion with foreign powers, were a late step along the road to Stalin’s mass purges, one of the most horrifying periods in Soviet history,” he said.

“This raid, like Stalin’s tactics, was conducted for the sake of imagery — intended to have a symbolic significance. While it is highly unusual for federal agents to target a client’s attorney, the Justice Department has come to rely on this tactic for attacking the Democrats’ political opposition. The ramifications for this are terrifying for the rule of law: One of its most fundamental pillars, attorney-client privilege, is being eroded amid highly theatrical displays of partisan warfare,” he warned.

“Little is known about the scope of the investigation, but reporting suggests that the focus could be on Giuliani’s work on behalf of foreign clients, including Ukraine, and his failure to register as a foreign agent while serving as the president’s personal attorney,” the report said.

But the Hill report also cited a threat to “attorney-client privilege would likely need authorization from some of the highest-ranking law enforcement officials in the government.”

Giuliani reportedly is facing questions about whether he should have registered as a foreign agent for his work advocating on behalf of Ukrainian officials, the report said.

The New York Times claimed Giuliani signed one of the various proposed retainers for that work but then decided against it.

Giuliani has denied wrongdoing. He said his retainers included provisions that he would not lobby.

The younger Giuliani warned of what this case indicates the Biden administration is intent on doing.

“When President Joe Biden was first sworn in, Trump supporters were terrified about the ramifications. If Paul Manafort, Roger Stone, and George Papadopoulos could be arrested during President Donald Trump’s White House, what would happen when the Democrats had free rein to prosecute any opponent they wanted?” he said.

“Now, we know the answer: They will target the opposition’s highest-profile allies over past issues that have been thoroughly investigated and cleared. Trump may have been acquitted over his dealings in Ukraine, but his allies are still being stalked and harassed over theirs. The outcome is worse than many of us feared and parallels Stalin’s prosecution of political rivals.”

He said the real target of the investigation should be the Democrats and John Kerry, who was revealed in a leaked recording to have discussed with Iran’s foreign minister “classified information about Israeli military operations.”

“Where is the investigation into this? Where is the pre-dawn raid of our climate change envoy’s home in Washington, D.C.?” Andrew Giuliani said.

Further, his father had evidence from a laptop computer apparently abandoned by Joe Biden’s son, Hunter, that contains emails and other information that raise questions even about Joe Biden’s involvement in various deals with Chinese interests.

“If this were about the rule of law, the federal agents who raided my father’s apartment would have seized the laptop we had belonging to Hunter Biden. But that would distract from the imagery,” the younger Giuliani said.