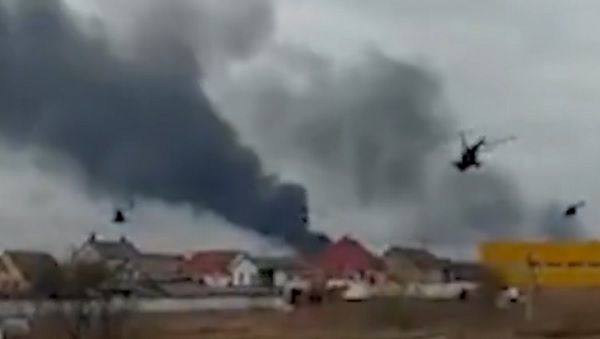 Russia launched its long-predicted invasion of Ukraine overnight, and dozens were reported dead within the first few hours.

Russian President Vladimir Putin, meanwhile, threatened unspecified consequences on anyone who would interfere with his aggression.

The Washington Examiner estimated the immediate death toll at more than 50 Ukrainian soldiers and civilians as explosions from incoming rockets and other munitions were reported from Kiev to Odessa.

Putin described his attack as a “special military operation” and many details remained sketchy at the outset of the violence.

Russians reportedly cross the Ukrainian border at multiple points and they invaded at least one port, the report said.

“Paratroopers were reportedly seen over Odessa and ground assaults were launched from Crimea, Donetsk and Belarus among other cities,” the Examiner reported, as missile strikes were reported in Mariuol and Kharkiv too.

Joe Biden promised new sanctions on Moscow and on Thursday held a meeting of his advisers to talk.

The report noted, “It was unclear if Russian President Vladimir Putin intends to seize the disputed and largely ethnic Russian Donbas region along Ukraine’s eastern border with Russia, where he earlier recognized breakaway territories, or has his sights set on a full-scale invasion of the entire nation.”

One of the impacts of the military action was that markets globally were sliding and the price of oil surged yet again, indicating that the action on the other side of the world actually will hit American consumers, too, with higher fuel prices.

The Daily Mail reported Russia’s attack came “from south, east and north, by land and by air.”

“Tanks rolled across the border, helicopters buzzed in the air and explosions were seen across the country after Vladimir Putin gave the order to attack,” the report said.

Russian helicopters were reported at Gostomel air base, including some that had been shot down, and Russian tanks from Crimea broke through Ukrainian lines near Kherson and were moving towards the Dnieper River.

Bodies were seen lying in the streets near destroyed Russian vehicles near Kharkiv.

The Mail reported, “Meanwhile pro-Russian rebel forces pushed out from the occupied Donbass region, capturing two villages and claiming to have shot two Ukrainian jets out of the skies. The port cities of Mariupol and Odessa, where Ukraine’s main naval bases are located, were also attacked. Russian tankers appeared to have blockaded the Kerch Strait, leading from the Black Sea to the Sea of Azov, cutting off Mariupol.”

He said he would hit anyone helping Ukraine with “consequences greater than any you have faced in history.” And he claimed he was seeking punishment of those who “committed numerous bloody crimes against civilians, including against citizens of the Russian Federation.”

A Chinese official said his nation was monitoring the situation and called for restraint.

The Mail called the invasion “a naked attempt to redraw the map of Europe by force.”

The report continued, “But NATO and the U.S. have made it clear that no troops will be sent, leaving Ukraine’s military – far the inferior of Russia – to hold off the assault alone. Few expect it to emerge victorious from what is almost certain to be a prolonged, bloody, and vicious war.”