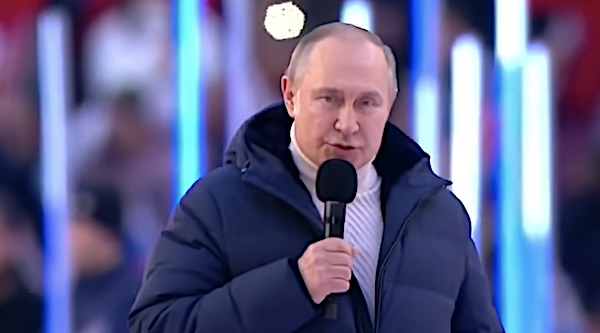 Vladimir Putin’s decision to use his Russian military to invade Ukraine and kill the innocent civilian population is based, he has claimed, on his efforts to protect the Donbass region and to “denazify” Ukraine.

But those, according to a Russian political scientist, amount to “propaganda narratives” for him.

“Ukraine is not a goal in itself. It matters only as Russia’s demonstration of power and independence from American pressure,” explains Olesya Zakharova in writings at the Middle East Media Research Institute.

“Putin wants to show that he can defy the ’empire of lies,’ and do what he wants, even if it has a big price tag. In addition, the ‘war with the West’ gives Putin at least an illusory sense of returning to the days of the Soviet Union, the loss of which, apparently, he regrets so much,” Zakharova wrote.

It is Putin’s rhetoric that is analyzed at MEMRI, where Zakharova explained Putin “lives in a reality of his own” and “it is important to understand that this reality that Putin perceives as reflected in his rhetoric.”

Frequently, Russia’s position has been that its invasion of and war on Ukraine is to protect the Donbass region from the “Nazi” regime in Ukraine.

“However, it is becoming obvious that it is neither the safety of Donbass nor the Ukrainian ‘Nazi regime’ that Putin cares about. The real enemy that Putin wants to defeat is the West, which for him is represented first and foremost by the United States. … After all, Ukraine is too small of an enemy for him.”

The analysis said Putin wants to convict the West for claiming “exceptionalism” and he claims the U.S. is obsessed with “destroying” Russia. He claims Washington would resort to “any means” to expand its influence.

To that end, Putin emphasizes his perception of the West as “hostile,” describing the United States as “irresponsible,” “arrogant,” having “low cultural standards,” “cynical,” “deceptive,” “a liar,” “hypocritical,” “insolent,” “morally degraded,” a supporter of “false values,” “a con-artist,” “abusive,” “conceited,” “condescending,” “disdainful,” “in a state of euphoria created by the feeling of absolute superiority,” “contemptuous,” etc.

That reveals his personal resentment and bitterness toward the West, Zakharova explained.

He describes the West as lying and as a “warmonger.”

“According to him, wherever the United States brought its ‘law and order,’ it created ‘bloody, non-healing wounds and the curse of international terrorism and extremism,’” the report said.

It explains he portrays himself as leading a fight for justice in the world.

“According to Putin, Russia is not to be blamed for anything, it is the West that seeks to destroy it simply for being itself. Hence, there is nothing left for Russia but to ‘defend’ itself,” the analysis said.