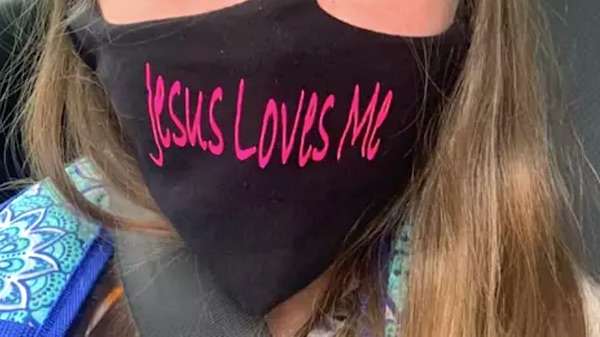 A school is facing a lawsuit for singling out one student’s “Jesus Loves Me” face mask during COVID because it created the “policy” against religious words only after it already had punished the student for wearing it.

That, and the fact the practice appears to violate the law.

Mississippi mother Jennifer Booth has explained the war she is in with Simpson County School District in a podcast with the Daily Signal.

The case, according to the Alliance Defending Freedom, which is representing the mother and her daughter, Lydia Booth, charges the school has abandoned its duty to “respect the free expression of students that the First Amendment guarantees to them.”

“No public school student should be singled out for peacefully sharing her religious beliefs with fellow students,” said ADF Senior Counsel Tyson Langhofer. “Today’s students will be tomorrow’s legislators, judges, educators, and voters. That’s why it’s so important that public schools demonstrate the First Amendment values they are supposed to be teaching to students.”

In the podcast, Booth explained she was a little surprised when the school notified her that her daughter was banned from wearing a face mask during COVID that said “Jesus Loves Me.”

For one thing, her daughter already had worn the mask for several months without issue.

Then, too, she examined the school’s policies, its handbook, and its rules, and found no authorization for such a speech ban. In fact, she found just the opposite – and when she challenged the school, officials were unable to find any such rule in their own handbook.

Booth pointed out the school specifically acknowledged the 2016 Mississippi Student Religious Freedom Act, “which is our state-level law that protects students’ freedom of speech as far as expressing their religious view in their work or in anything, so long as they’re not being disruptive about it. And then on the very next page, they have where they recognize the students’ freedom of speech.”

Eventually, days later, she was told by the school that the ban on “religious” words was in the school’s COVID restart plan.

But Booth checked the original posting of the plan, and it wasn’t there.

But it was in a document that an administrator emailed to her.

Booth, whose career is in IT, checked the metadata for the document she was sent, and found out the policy had been modified by the school administrator “30 minutes before he called me.”

She said the knowledge that the school fabricated a policy to support its position after attacking the message her child wanted to convey to her fellow students was “devastating.”

Her connection to ADF followed shortly, and now the case is pending.

Langhofer explained, “The most surprising thing about Jennifer’s story to me and the sad thing is that not only did they not have a policy, they modified the policy, or purported to modify the policy, to address that situation. But the sad thing is that this school official actually thought that was going to make it better. It didn’t make it better, it made it worse. Why did it make it worse? Because they targeted political and religious speech.”

Langhofer continued, “And if you know anything about the First Amendment at all, you know that the worst thing you can do as a government official is to target certain content of certain speech, the viewpoint of certain speech. And so what it tells you is there’s a lack of understanding in our government officials about what our fundamental rights are.

The lawyer told the school has backed down, now allowing the child to war her mask, but so far failed to admit what it did was wrong.