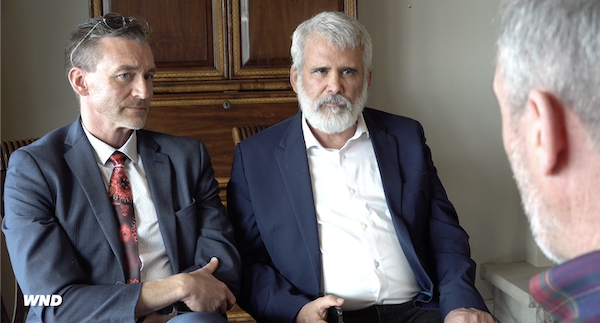 GIG HARBOR, Washington – Urging CDC scientists to speak out, Dr. Robert Malone and Dr. Ryan Cole reacted Monday to the news reported by the New York Times that agency officials admit they have withheld COVID data broken down by age, race and vaccination status because the American people might misinterpret it.

“This meets the criteria of scientific fraud,” said Malone, the key inventor of the mRNA technology platform used in the Pfizer and Moderna vaccines. “Withholding data is scientific fraud.”

Cole, a Mayo Clinic-trained pathologist who runs a major diagnostic lab in Idaho, said that as “an ethical physician who took oaths to the human race, this is incredibly disturbing.”

“These are the people that are entrusted to tell us the truth,” he said of the CDC officials.

The two outspoken medical scientists were featured at four sold-out events Sunday and Monday near Seattle hosted by a non-profit called One Washington that is helping equip parents, lawmakers and activists to counter moves by the state Board of Health to add the COVID-19 vaccine to the required shots for public school children.

The Times reported the CDC “has been routinely collecting information since the Covid vaccines were first rolled out last year,” but the agency “has been reluctant to make those figures public, the official said, because they might be misinterpreted as the vaccines being ineffective.”

The report said that “[t]wo full years into the pandemic, the agency leading the country’s response to the public health emergency has published only a tiny fraction of the data it has collected,” citing “several people familiar” with the withheld data. “Much of the withheld information could help state and local health officials better target their efforts to bring the virus under control,” the Times said.

Malone noted the Times quoted Samuel Scarpino, managing director of pathogen surveillance at the Rockefeller Foundation’s Pandemic Prevention Institute, saying the CDC “is a political organization as much as it is a public health organization.” He said the steps that it takes to get the data released “are often well outside of the control of many of the scientists that work at the C.D.C.”

Malone said that what Scarpino essentially is saying is “that the governmental leadership of the CDC has stifled CDC scientists, in preventing them from disclosing key information to the public about the risks of the vaccine.”

“That is stunning,” he said.

Malone said it’s “way past time” for CDC scientists and physicians to “come clean” and speak out.

Cole agreed that they have “an ethical responsibility to humanity” to tell the American people what is going on. Last month, he testified with Malone and other physicians and scientists at a panel convened by Sen. Ron Johnson, R-Wis., called “COVID-19: A Second Opinion.”  Cole testified that he has observed in his lab over the past year a startling uptick in incidences of clotting, auto-immune diseases and cancers.

In the interview with WND, Malone also reacted to Bill Gates’ remark last week that “sadly,” the omicron variant is acting like a natural vaccine, with the vaccine inventor recalling his forecast in December that omicron could turn out to be a “Christmas present.”

And he discussed “worrisome” data from around the world indicating that the fear the FDA expressed during the clinical trials of the possibility of vaccine-enhanced disease and infection is occurring.

“This knee-jerk (reaction) of just doing more vaccination – it has significant risk of making things worse rather than better,” he said.

Cole noted that Israel’s top vaccinologist, Cyrille Cohen, is arguing the science indicates the vaccines should be stopped. And Cole contended President Biden’s extension of the COVID-19 national emergency order beyond March 1 is fraudulent, “because there is no emergency.”

Last week, after its data indicated vaccinated people were more vulnerable to COVID-19 infection than the unvaccinated, Scotland’s national health system announced it would stop publishing its weekly chart of COVID-19 hospitalizations and deaths by vaccine status, explaining it was being “misinterpreted” by “anti-vaxxers.”

Meanwhile, the CDC had a database called the Vaccine Adverse Events Reporting System, or VAERS, that CDC Director Rochelle Walensky continues to undermine as unreliable while refusing to disclose to the public how many people have been seriously injured or have died from the COVID vaccines.

More excerpts from the Times story: