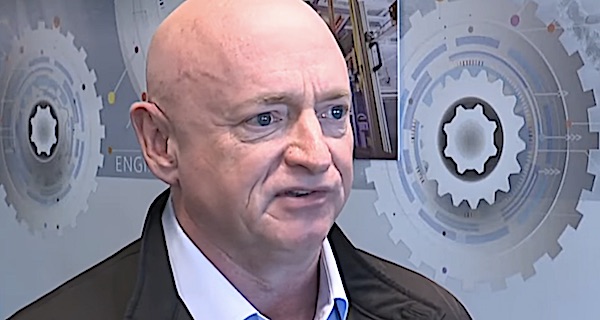 Sen. Mark Kelly has pledged since unveiling his 2019 senate bid that he would refuse corporate campaign dollars. But since that time, the Arizona Democrat has accepted hundreds of thousands in donations from political action committees (PAC) backed by corporations, according to federal records reviewed by the Daily Caller News Foundation.

Kelly has repeatedly emphasized he does not and will not “take a dime of corporate PAC money.” Despite that pledge, the former astronaut’s campaign has raked in roughly $154,000 from Democratic PACs since March 2019 that have hauled in large sums from PACs for corporations, Federal Election Commission (FEC) records show.

Nutmeg PAC, a leadership PAC associated with Democratic Connecticut Sen. Richard Blumenthal, has contributed $17,500 to Kelly’s campaign since May 2019. At the same time, the PAC has accepted $231,000 since 2011 from corporate PACs for Microsoft, Comcast, Raytheon Technologies, Pfizer, Honeywell, General Dynamics and UBS, filings show.

Nevertheless, the senator has tweeted about not accepting “corporate PAC” money a total of 45 times between February 2019 and July 18, 2022, according to a DCNF review of Kelly’s Twitter account history.

Kelly, who first tweeted about the issue in February 2019, released a campaign ad in 2020 in which he claimed “corporate money into campaigns poisons our democracy,” explaining he would have a “grassroots effort” to win his race. The senator also sponsored a bill in January that would ban corporations from operating PACs.

“All he’s good at is raising money from Wall Street and Big Pharma executives,” Arizona Senate candidate Blake Masters, who has led in recent Republican primary polls, told the DCNF when asked about Kelly’s donations.

Kelly’s actions are “hypocritical,” Mark Brnovich, the Republican Arizona Attorney General who is also running for Senate, told the DCNF. His actions exemplify “why so many people are fed up with Washington, D.C.,” Brnovich also said.

One of the biggest problems in our politics today is the amount of corporate PAC money in politics. That’s why I refuse to take a dime from corporate PACs to fund my campaign. I will always fight #ForArizona families, not special interests.

Kelly’s senate seat is a “toss up” in the 2022 midterms, according to The Cook Political Report, a nonpartisan group analyzing elections and campaigns. He is favorable with 50% of Arizonans and 49% of Independent voters, a June poll by OH Predicative Insights found.

Kelly’s campaign did not respond to the DCNF’s request for comment.

Josh Hypes contributed to this story.

This story originally was published by the Daily Caller News Foundation.

Content created by The Daily Caller News Foundation is available without charge to any eligible news publisher that can provide a large audience. For licensing opportunities of our original content, please contact licensing@dailycallernewsfoundation.org.