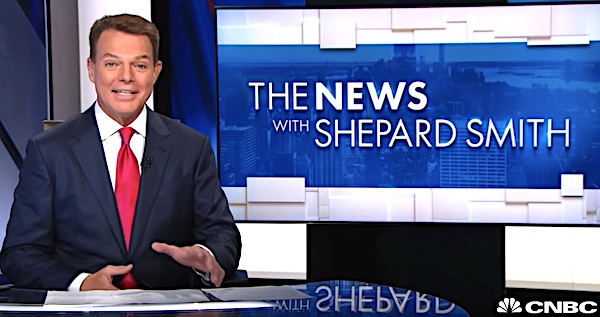 Entertainer/reporter Shepard Smith, who fled Fox News some time ago and recently has been trying to find footing with a show on CNBC, has been cancelled there now.

Variety reports Smith, who moved to the network in the fall of 2020 and was trying to grow its audience “with a non-partisan general-news program,” will have his last show this month.

“The News with Shepard Smith” will be replaced with a business news time period early next year.

“The anchors for that program will be named at a later date, and it remains to be seen whether CNBC will select candidates from among its current roster or seek to woo someone from outside its ranks,” the report said.

Variety said, “In a memo sent to staffers Thursday, Sullivan indicated the network needed to ‘prioritize and focus on our core strengths of business news and personal finance. This is key in our efforts to continue building on our position as the number one global business news brand and to connect with new audiences of all kinds interested in their financial future.’”

It previously had tested shows with John McEnroe, Donny Deutsch and Dennis Miller.

CNBC officials had hoped Smith would be able to keep the crowd that tuned in for Jim Cramer’s “Mad Money,” but it wasn’t happening.

Variety said Smith left Fox after clashing with primetime host Tucker Carlson, who disparaged the comments made by a guest on Smith’s regular afternoon program.

His constant inclusion of his leftist opinions in the “news” raised eyebrows, and questions, across the industry.

WND reported, on his departure from Fox, that he was unable to attract viewers to CNBC.

He averaged, at the outset, only 322,000 total viewers during his first week of shows there.

While he still as at Fox, Smith drew the attention of then-President Donald Trump.

Smith himself said at the time, “I am honored to continue to pursue the truth, both for CNBC’s loyal viewers and for those who have been following my reporting for decades in good times and in bad.”

In 2017, Smith opened up about his homosexuality, explaining: “I don’t think about it. It’s not a thing. I go to work. I manage a lot of people. I cover the news. I deal with holy hell around me. I go home to the man I’m in love with.”

In 2015, Smith cut into his own press conference coverage of the release of Kentucky clerk Kim Davis from jail to rail against her, as well as those who supported her denial of wedding certificates to same-sex couples, saying such is simply a “religious play” that has no business in government service.

He also compared Kim Davis supporters to those who oppose Shariah law, characterizing them as one and the same when it comes to ideology. Referring to Christians, Smith said, “Haters are going to hate.”

That comment prompted Jane Mohline, a WND reader to say of Smith: “He’s proven where his true character lies: in deception, in lies and in disrespect for anyone who disagrees with his limited, destructive life views and choices.”

On the heels of Barack Obama’s election to the presidency in 2008, Smith denied there was any mainstream media bias in favor of the Democrat.

When comedian Nick DiPaolo had said, “The mainstream media being so in the tank for Obama … .”

In July 2001, Smith, then the anchor of cable TV’s highest-rated evening newscast, went unpunished for what police say was aggravated assault with a motor vehicle.

In November 2000, during the Florida presidential election fiasco, Smith had been arrested for allegedly driving his car into another reporter who was standing in a parking space she attempted to save for a friend. The victim, freelance journalist Maureen Walsh of Tallahassee, was hospitalized and released later the same day with bruises on her knees and legs.

According to police, Walsh was standing across the street from the state capitol when Smith drove up and “shouted some profanities at her and basically just struck her, striking her at the knees, which threw her up on the car.”

After a few case-management hearings between attorneys and the court, the charges against Smith were dropped.