Sheriff Joe, 'Harry Klaypool' team up in defense of police 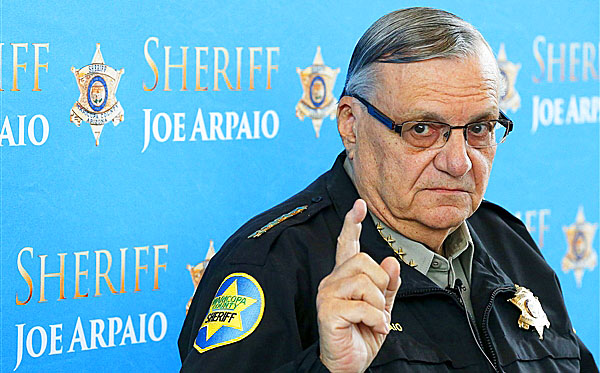 Today’s America is watching, amid high-profiles cases like the Derek Chauvin trial in Minneapolis, a multitude of demands from politicians and Marxist activists for police to be canceled, defunded and legislated out of existence.

They are being second-guessed, reprimanded, arrested and even charged for behavior that might, or might not, be an offense.

But if that campaign succeeds, to whom will Americans call when they need help?

Sen. John Kennedy, R-La., for a Fox News audience, summed it up: “I’ve said it before. If you hate cops just because they’re cops, then feel free to call a criminal, call a meth head, the next time you get in trouble.”

His sarcasm was aimed at those pursuing that very agenda, but just as clearly, that’s not likely to be a majority of Americans.

For them, they still want the police, need the police, when their car is stolen, their homes broken into, their family assaulted, or many of those things that are so much worse.

Which is why the America’s Sheriff website was created by longtime Maricopa County, Arizona, Sheriff Joe Arpaio, who at nearly 90 years old still is active in battling for the law enforcers across the nation, and noted attorney Larry Klayman, founder of Freedom Watch USA.

It is there to defend police who need defending, and to making sure that there are officers to arrive when Americans need help.

The alternative would be a chaos that would leave only the strongest, biggest, baddest thugs in charge, they explained.

The organization’s goal is to “restore law and order in this age of mounting violence by domestic terrorists who generally want to seize control and turn the nation into a social if not communist state,” the site explains.

“In so doing, radicals of all stripes and persuasions have attacked, maimed and even killed law enforcement officers, while leftist mayors and governors have stood by and watched, issuing stand down orders and tying the hands of police departments. This exposes the populace to an increasing wave of violent if not deadly crime,” they explained.

Sheriff Joe, famed for running his sheriff’s office for decades on the foundation that criminals need to be caught, locked up and punished, said he’s disgusted by what is infecting “our great country where the respect of the criminal justice system and our dedicated law enforcement officers has disappeared because of crooked politicians with a mission to destroy our country for political reasons.”

“Larry Klayman and I and all those who join and support America’s Sheriff will not stand for this! Without our brave police and other law enforcement the country is left defenseless,” he warned.

Klayman said the organization was created “to fill the void left by our virtually inert Justice Department, which by and large has abdicated its responsibility to defend the citizenry in these dangerous times.”

The evidence of the issue is in nearly after daily news report.

The Washington Examiner explained that police departments across the nation are struggling to attract recruits “because of the increasingly ‘toxic’ political environment.”

Thousands of officers have been retiring in waves, and the decline in the moral is being accompanied by a surge in crime. One recent weekend saw 46 shootings in Chicago alone, seven of them fatal.

Murders rose in 51 of 57 cities that release public data.

“We’re very worried,” National Sheriffs’ Association executive director Jonathan Thompson told the Daily Caller News Foundation. “This may well have been the ulterior motive — to just make officers so uneasy and nervous to just retire and call it quits.”

One Portland police detective wrote in his exit interview, “The community shows zero support. The city council are raging idiots, in addition to being stupid. Additionally, the mayor and council ignore actual facts on crime and policing in favor of radical leftist and anarchists fantasy.”

Arpaio, in an interview with WND, said the big scenario that’s developing “has to be turned around.”

He said the America’s Sheriff organization provides a way to defend officers who are being “thrown under the bus.”

“We are going to defend the cops,” he charged. Then, he added, the organization will “go after” those creating the problems.

Arpaio, called “America’s Toughest Sheriff” over the course of his career, has been more than five decades in law enforcement, as an executive with the U.S. Drug Enforcement Administration, a New York City cop, and sheriff in Arizona.

He was famous for fighting illegal immigration, and offended the Barack Obama administration with his caseload. Ultimately, the feds intervened in his county and made allegations against him that took him to court, where he was slapped with a misdemeanor over his practices.

President Trump then pardoned him.

Arpaio and Klayman ultimately were the first to sue Obama over his amnesty for immigrant lawbreakers.

Arpaio has appeared on everything from 60 Minutes to Larry King.

Klayman is known as a burr under the saddle of the Washington establishment and once obtained a court ruling that Bill Clinton committed a crime.

He was made a corruption-fighting legend when an NBC show, “West Wing,” created character Harry Klaypool in his image.

Klayman noted one of the first cases the organization has taken on is the Michael Melvin case in Philadelphia. There, several plaintiffs are suing the government for civil rights violations, over the “targeted discriminatory and illegal hacking of Caucasian and other non-African-American, non-Muslim city of Philadelphia police officers’ computer accounts, twitter accounts, and social media accounts…”

“This concerted action and conspiracy are motivated by and are the result of racist, ethnic and sex-based animus and prejudice against plaintiffs and the targeted class of similarly situated Philadelphia police officers,” it says.

“The far-left movement has been building over the last several decades, with a dramatic increase in magnitude arising during and since the 2016 election cycle, wherein leftist and anarchist organizations funded by high-profile wealthy ultra-leftist donors, including George Soros, have undertaken a vigorous campaign to install elected prosecutors, such as defendant Larry Krasner,and other court personnel who are intentionally opposed to criminal law enforcement with regard to certain groups such as African-Americans and Muslims and hostile and adverse to the police, in particular white cops…” it claims.

Klayman confirmed that the organization already has been advising officers, including those who, on their own, attended a rally by President Trump last January, after which some people invaded the U.S. Capitol and vandalized some rooms.

Those officers, who did not actually go to the Capitol, now are being “harassed,” he said.

Arpaio told WND he’s confident America will survive the threat of the disintegration of police departments, because it is the greatest country ever.

But he also said the problem is there are people who don’t want the nation to survive.

“That’s the battle we are in,” he said. “That the battle in law enforcement. That’s the reason crime is going to go up.”

Arpaio also told WND riots across the nation over the last year, confrontations triggered by movements like Black Lives Matter, also have damaged America in the eyes of the world.

Pelosi Uses Capitol Police as Her Own Personal Stasi, Demands Arrest of All Non-Mask Wearers in the Capitol

Pelosi Uses Capitol Police as Her Own Personal Stasi, Demands Arrest of All Non-Mask Wearers in the Capitol