A study based on weekly government data in New Zealand – one of the world’s most vaccinated nations – found that the age groups most likely to have had COVID booster shots had up to 10% more excess deaths.

Excess mortality is the number of deaths from all causes above what would be typically expected in one year.

Authored by John Gibson, an economics professor at the University of Waikato in Hamilton, New Zealand, the study found there were 16 excess deaths per 100,000 booster doses in the country, amounting to more than 400 excess deaths, reported the website The Expose.

Gibson said that if extrapolated, it amounted to 300,000 excess deaths worldwide.

In his paper, “The Rollout of COVID-19 Booster Vaccines is Associated with Rising Excess Mortality in New Zealand,” the economist said the bottom line from his study is that the risks of the COVID vaccines outweigh any benefits.

“The ratio of vaccine risk to benefits likely has swung more towards risk than during the original randomised trials, due to dose-dependent adverse events and to fixation of immune responses on a variant no longer circulating,” he wrote.

The Expose noted that last December, New Zealand’s COVID Response minister, Chris Hipkins, reduced the interval between the second dose and the booster shot from six months to four months. That made 82% of vaccinated New Zealanders eligible for a booster by late February 2022.

A graph from Gibson’s analysis shows a sustained rise in excess mortality coinciding with the booster rollout. 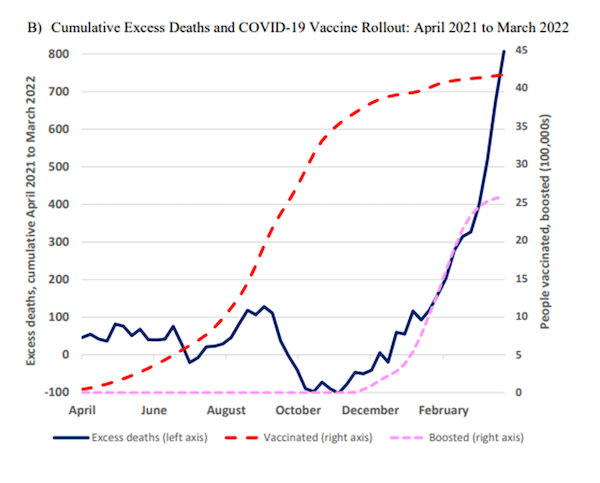 The increase in excess mortality over the past four months, the study found, was experienced by all ages except the 0-29 years group, who were mostly ineligible for boosters.