'The game could soon be up': Analysis projects Russians may 'buckle' in days 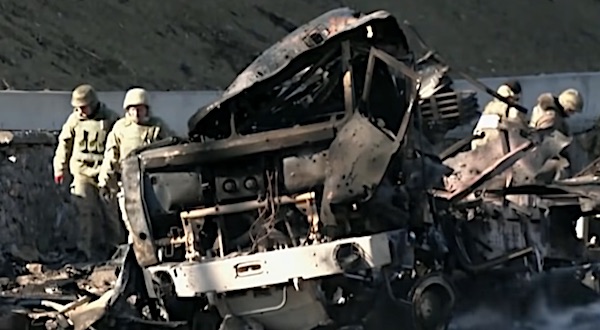 An interview with a number of defense experts published by the Sun has revealed the opinion that Vladimir Putin has only days to win the war in Ukraine “before his forces buckle.”

The analysis explains Putin, the Russian president, had expected a quick victory over his neighbor when he ordered the invasion of Ukraine to launch late last month.

Since then his soldiers have moved into Ukraine, and there have been multiple attacks on schools and hospitals and more, with women and children being targeted.

However, the Ukraine resistance has proven formidable, the analysis found.

It explained that Ukrainian officials have estimated 13,500 Russian troops have been killed, and the invader has lost 81 planes, 95 helicopters, 404 tanks, 1,379 armored vehicles, 640 cars, 60 fuel tanks and 36 anti-aircraft weapons.

“The invasion has seen Russian pilots blasted out of the sky, tanks ambushed and videos of sobbing soldiers after surrendering to the Ukrainians,” the Sun reported. “Among the dead are at least 12 top commanders, including three generals, with the latest killed a top spy commander.”

Now, the Sun reported, “Both a senior U.K. defense source and the former commander of U.S. forces say the game could soon be up for Russia.”

One of those sources said, in the Daily Mail, “Ukraine has Russia on the run.”

“It is running out of manpower and running out of energy. As long as we keep pressing they’ve got 10 to 14 days before reaching their culminating point. That’s when the strength of Ukraine’s resistance should become greater than Russia’s attacking force,” a source explained.

The Sun’s analysis continued, “Meanwhile, retired U.S. army General Ben Hodges has predicted Russian forces will be unable to continue their assault on Ukraine 10 days from now – if Ukraine can hold out that long.”

He cited three failings of the Russian military:

He called for a higher speed of delivery of weapons to Ukraine.

“If we give the Ukrainians enough, where they can outlast Russia until Russia culminates, then in my assessment, unless something dramatically different happens, it’s about 10 days.”