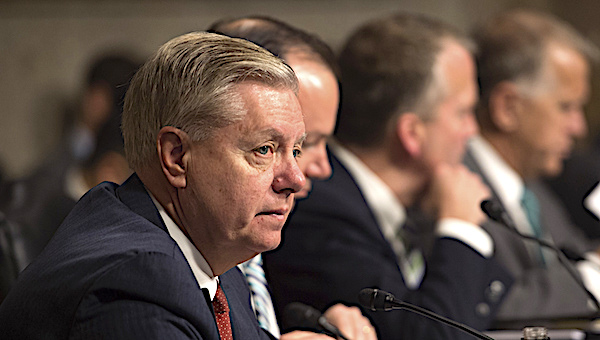 The chief strategist for the Democrat Party in Rhode Island has expressed her death wish for Sen. Lindsey Graham, a Republican.

Then she deleted her statement, claiming it was “poor judgement (sic).”

But readers weren’t convinced of her sincerity.

It opened with this, from Kate Coyne McCoy:

The de facto executive director of the @RIDemParty apparently wants #SCSEN @LindseyGrahamSC to die of coronavirus.

“It’s wrong to hope he dies from Covid right? Asking for a friend.”

Red State explained Graham confirmed he was the first senator to have been fully vaccinated and to have been diagnosed again with COVID-19.

The report said, “Interesting group, looks like the ‘moderates’ might have been chatting about something. But they … all got tested. The tests were either negative (Manchin) or they haven’t gotten the results back yet.”

The report suggested, “You would think the natural thing would be to wish Graham well and hope he recovers.”

But that apparently applies only “if you were a civil human being,” the report charged.

The report continued, “She was basically trying to appeal for attention to her brethren on the left because of their Lindsey Graham hate. That’s the greater issue here – that some of the left wish for or would cheer the death of Republicans. We saw it when President Donald Trump got the Wuhan coronavirus. This is where they are at. This is pretty evil.”

McCoy then deleted her statement, and backtracked, sort of.

I made a mistake. I used poor judgement which I obviously regret.

Which drew a commenter to respond: “It’s not a mistake when you think it through enough to type it out. Come on! You’ve been around long enough to know that you were going to get called out on it. The only regret you have is getting caught.”