Troops could stay in D.C. 'as long as they are needed' 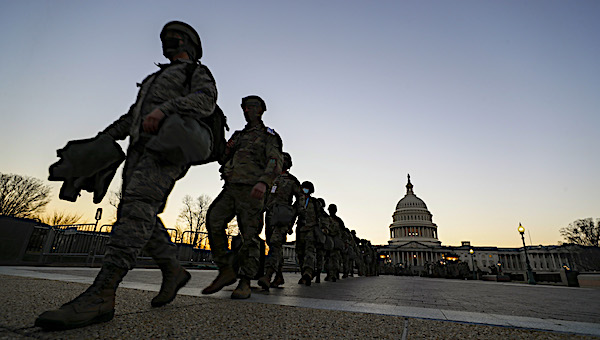 Some commentators have likened the U.S. Capitol, now encircled by high fencing topped by barbed wire and patrolled by National Guard troops, with the Green Zone in Baghdad.

And it looks like it will stay that way for some time.

When House Speaker Nancy Pelosi was asked Thursday about a Capitol Police request that troops remain for another two months, she said they should stay “as long as they are needed.”

“We have to have what we need when we need it, and in the numbers that we need,” the Democrat said, the Washington Examiner reported.

About 5,200 National Guard troops are currently in Washington in a deployment that began after the Jan. 6 riot at the Capitol.

Despite prior warnings of possible violence on Jan. 6 — the day Congress ratified the Electoral College vote — security officials were largely unprepared, and hundreds of protesters entered the building.

Most did nothing but enter, while about 275 have been charged with offenses such as vandalism. Despite the Democrats’ repeated descriptions of the incident as an “armed insurrection,” authorities said no guns were involved.

The Examiner reported U.S. Capitol Police have requested an extension of the National Guard mission.

A statement from the Defense Department said, “We have indeed received a request and DOD is currently considering [the] request.”

The troops could stay another two months beyond the original ending date of March 12.

The deployment is estimated to have cost hundreds of millions of dollars and has not been without controversy. In January, soldiers were assigned to empty parking garages to sleep, and this week it was reported that a whistleblower claimed troops were being fed undercooked meat and meals with metal shavings, making them sick.