Trump blasts 'power-hungry lunatics': 'We are not going to take it anymore' 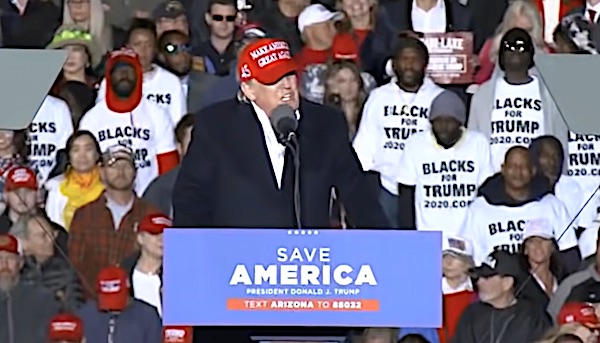 Former President Donald Trump was his very defiant self in a rally Saturday night in Florence, Arizona.

He got quickly into what Joe Biden’s recent actions such as “wreaking havoc on our economy, going mandate-crazy, and running neighborhoods … running roughshod all over this country.”

Trump also warned about the “corrupt, power-hungry lunatics” in the Democratic Party who “are putting corporate profits over the rights of the American people” by implementing vaccine mandates, thereby lining pharmaceutical executives’ pockets at the expense of the health and safety of people in the United States.

“We’re done with the mandates. … The mandates are a disaster for our country,” he said, arguing vaccine requirements are “just absolutely decimating our economy.”

Trump also criticized the jail-cell conditions of Jan. 6 prisoners as “an unprecedented assault on American civil rights and liberties,” arguing the accused rioters are being overzealously persecuted as “political prisoners.”

“The jails are filthy, disgusting, dirty, and they’re even be cited by the courts for being so horrible. … The showers a disgusting, the bathrooms are horrible, and people are being forced to live like that,” he said. “Let them use their lawyers. Let them go out and defend themselves, and if we think they’re innocent, we should help them defend themselves.”

The former president made several references to the Capitol Hill riot, taking particular aim at the “un-select committee of political hacks” investigating the incident as part of the Jan. 6 commission.

“They are Democratic hacks, and they’re vicious, and every one of a voted to impeach me, every one of them. … It’s a disgrace! It’s a disgrace to our country, what’s happening, and it takes the meaning out of the word,” he said, noting that Republican Rep. Liz Cheney “now polling at 16%,” and Rep. Adam Kinzinger “a crier,” both of whom voted in favor of Trump’s second impeachment, are also on the select committee.

He also noted New York’s Republican Rep. John Katko while applauding Kinzinger’s announcement that he would retire from the House after Illinois released a post-census map unfavorable to his reelection prospects.

“They’re falling fast and furious. The ones that voted to impeach, we’re getting rid of them fast.”

So far, six Republicans and 18 Democrats have announced their retirement from the House amid a midterm political climate that is expected to be heavily favorable toward the GOP.