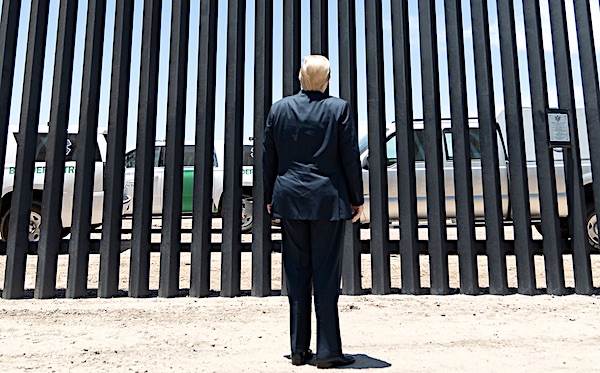 Amid a surge of migrant families and unaccompanied children, former President Trump on Friday issued a statement scolding President Biden for a “spiralling tsunami” at the border.

“Our border is now totally out of control thanks to the disastrous leadership of Joe Biden,” Trump said. “Our great Border Patrol and ICE agents have been disrespected, demeaned, and mocked by the Biden Administration. A mass incursion into the country by people who should not be here is happening on an hourly basis, getting worse by the minute.”

Trump noted the Biden administration order to release migrants in South Texas who had tested positive for COVID-19 and the shutdown of interior immigration enforcement.

“The spiraling tsunami at the border is overwhelming local communities, depleting budgets, crowding hospitals, and taking jobs from legal American workers,” he said.

Trump said that when he left office, his administration “had achieved the most secure border in our country’s history.”

“Under Biden, it will soon be worse, more dangerous, and more out of control than ever before. He has violated his oath of office to uphold our Constitution and enforce our laws,” he said.

“We don’t take our advice or counsel from former President Trump on immigration policy, which was not only inhumane but ineffective over the last four years,” she said. “We’re going to tread our own path forward and that includes treating children with humanity and respect and ensuring they’re safe when they cross our borders.”

Biden has fufilled campaign promises to stop construction of the border wall, eliminate the Remain in Mexico policy and restore “catch-and-release.” In Congress, his Democratic allies are proposing legislation that would provide a pathway for citizenship for illegal immigrants who are already in the country.

Biden also has ended agreements with Honduras, El Salvador and Guatemala that allowed migrants to make asylum claims from their home countries.

Trump’s agreement with the Northern Triangle countries was one of many made with the aim of ending the 2019 migrant crisis.

In his statement Friday, Trump said Biden abandoned the “incredible” Remain in Mexico policy “probably because it worked so well.”

“Likewise, our Safe Third Agreements in Central America were extraordinarily successful, so Biden foolishly ditched them too,” he said.

Trump charged in his CPAC speech last Sunday that Biden was fomenting a “self-inflicted humanitarian and national security disaster.”