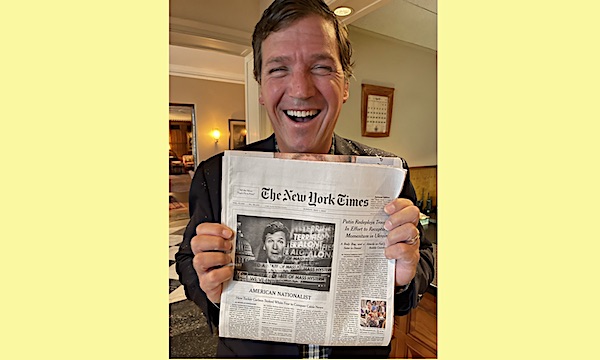 Tucker Carlson is openly laughing at the latest hit piece on him by the New York Times, which claims the popular Fox News host is stoking “white fear” and that his program is perhaps “the most racist program in the history of cable news.”

The highest-rated host in cable news tweeted a photo of himself in full laugh mode while holding a weekend edition of the Times featuring an in-depth, front-page series titled “American Nationalist: Part 1,” “How Tucker Carlson Stoked White Fear to Conquer Cable.”

“This isn’t an opinion or a take,” Times reporter Nick Confessore tweeted. “It’s a fact – supported by our content analysis of 1,150 episodes of ‘Tucker Carlson Tonight.’”

More successfully than almost anyone else, Carlson has taken a set of themes and conspiracy theories, formerly caged on the fringe of American politics, and brought them to a mainstream audience. His show may be the most racist program in the history of cable news.

Carlson told Axios he hasn’t read a word of the series about him, “and of course won’t.”

On his program last week, Carlson said of the reporters at the Times, “They’re suck-ups, brown-nosers, lickspittles, not people you’d want to have dinner with.” 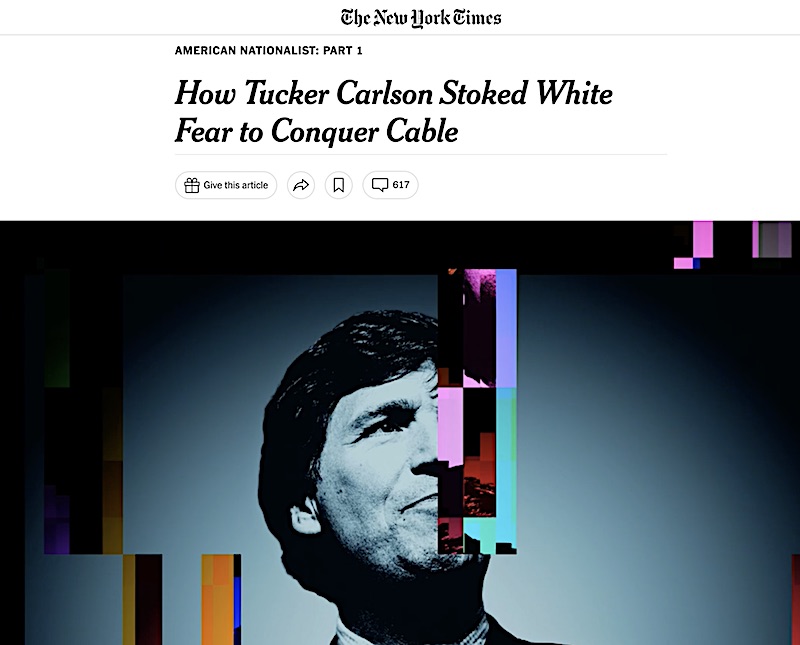 “This has gotta be the tenth or twenty-seventh or two hundred and seventeenth story just like this the New York Times has run and all of them are pretty much identical,” Carlson explained.

“If you wanted to criticize this show, there are plenty of things you could say. We’ve got a ton of supposedly controversial opinions on a million different topics. We talk about them every night.”

The New York Times is calling us racist again. Here’s our response. pic.twitter.com/GOtG5LHBi6

Regarding race, Carlson said he does not have an “exotic” view.

“We don’t think your skin color is the most important thing about you. We think all people were created by God and should therefore be judged by what they do, not by how they look.”

“Why do they keep calling us racist? Well, to make us shut up, obviously. They tried the same thing with Trump for years. They’re doing out right now to Elon Musk, of course. If you don’t obey them, they denounce you as a racist. Why do they do this? They do it ’cause it works. But here’s the thing. It can only work if you play along with it, and we don’t plan to.”

Some reactions to Tucker’s photo include: