U.S. city that allowed anarchists to occupy it now sued by black family over son's murder

The city government that allowed Black Lives Matter activists and anarchists to take control of a portion of Seattle is the target of a lawsuit by the family of a black teenager whose murder in the occupied territory remains unsolved.

The family of 16-year-old Antonio Mays Jr. contends their son might still be alive if not for the failure of city leadership to provide medical, police and emergency services to the Capitol Hill Organized Protest zone, known as CHOP, during the summer 2020 riots, the Seattle Times reported.

It was only after Mays’ death and a protest at the home of then-Mayor Jenny Durkan that the city shut down the CHOP zone. Durkan previously had celebrated the unprecedented protest as “the summer of love.”

Amid the desertion of Seattle’s East Police Precinct for three weeks, a “state-created danger” developed that allowed Mays’ death, the complaint states.

“There were horrible things going on over there and they didn’t do anything to shut it down,”Evan Oshan, an attorney for the Mays family told the Times. “And it really was a result of the poor leadership in the city of Seattle – and just across the board.”

Mays was not the only black teen killed in the protester-governed CHOP zone. After the first night of violence, 19-year-old Horace Lorenzo Anderson Jr. was shot. The teen was transported in the back of a pickup truck to Seattle’s top trauma center, Harborview Medical Center, where he was declared dead.

The complaint points out that city and state leaders remained mostly silent after the murders. When Mays Jr. and a 14-year-old boy were shot multiple times while inside a white Jeep Cherokee, police did not arrive at the scene for nearly five hours. And two years later, no one has been charged in association with Mays Jr.’s death. 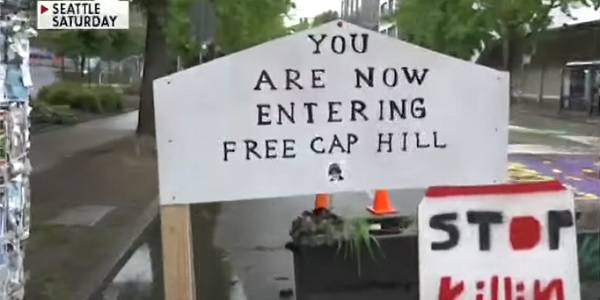 His father, Antonio Mays Sr., said he’s been told the investigation was closed due to insufficient evidence. The city insists a probe is ongoing.

“Last thing I heard from them was encouragement not to talk to the media, not to talk to anybody, not to cause any ruckus or fuss or stigma or not to stir anything up and just sit back and be patient and wait,” Mays Sr. told the Times. “But I am the dad, I am the father, I need answers and I need justice.”

But ultimate responsibility rests with city leadership, the complaint states, for not intervening when Simone allegedly was arming his “makeshift police force” from the trunk of a Tesla filled with AR-15 style rifles, as indicated by a YouTube video.

Last month, Seattle settled a wrongful-death lawsuit for $500,000 brought by the family of Horace Lorenzo Anderson Jr., the first CHOP victim, the Times reported. And a group of businesses, developers and residents have filed a lawsuit in federal court claiming “extensive harm” caused by the city’s failure to break up the CHOP.

Similar to the experience of the Mays family, the father of Horace Lorenzo Anderson Jr. said in a Fox News interview in July 2020 that he was pleading for answers from authorities regarding his son’s death to no avail.

“They say, ‘He’s just a 19-year-old.’ No, that’s Horace Lorenzo Anderson [Jr.]. That’s my son, and I loved him. Somebody needs to come to my house and knock on my door and tell me something.”

Anderson said the “only way I found out was just two of his friends, just two friends that just happened to be up there and they came and told me.”

Defund the police
The CHOP protesters infamously called for defunding the Seattle Police Department by 50%, and although the six-block occupation was shut down, the City Council later voted to cut salaries and jobs for as many as 100 officers. More than 200 demoralized officers quit, and the city’s first black police chief, Carmen Best, among them.

Seattle’s new mayor, Bruce Harrell, was elected last fall on a pledge to reject calls to defund police, but last month the Seattle Times reported the city’s sexual assault and child abuse unit staff had been so depleted it had stopped assigning new cases with adult victims.

The Seattle paper noted that enforcement agencies nationwide have suffered labor shortages since the 2020 protests of the death of George Floyd in police custody.

“But Seattle’s failure to staff its sexual assault unit stands out from other local police departments and raises questions about the Seattle Police Department’s priorities, advocates say,” the Times reported.

“We have done our best to try and let people know what that means on the sexual assault side – it means that these cases are not being investigated the way they should be,” he told the Times.

In March, the immigrant owner of a Seattle bakery who closed a downtown shop amid record-breaking crime as well as drug users blocking the entrance while police stand by idly explained why she finally gave up.

After a man was shot dead around the corner of Piroshky Piroshky bakery, Olga Sagan said it finally was time to stop pushing for change.

“No one is listening. This is not new. Look at how many small businesses we have left here. We have only big businesses here,” said Sagan in an interview with independent journalist Brandi Kruse.

“I’m a smart business owner. I have given up my business during pandemic. I can read signs. I can read patterns. And this is a pattern that I can’t deal with anymore,” she said.

Last August, the sheriff of King County informed her employees that they had to work from home because it was too dangerous to come to Sheriff’s Headquarters in downtown Seattle.