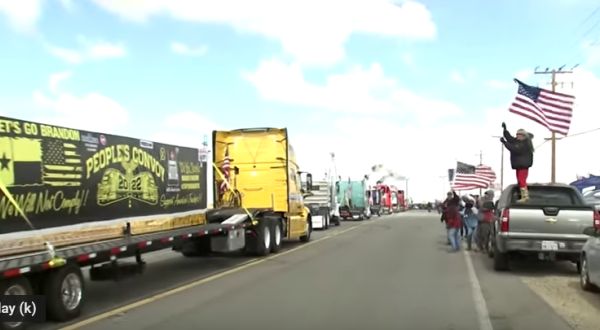 Weeks ago, when Canadian truckers started their convoy protesting their nation’s COVID mandates, not every fuel stop, news conference, or statement was set up in advance, earning the “fringe” epithet from Prime Minister Justin Trudeau who resorted to violence to halt the protest when it reached Ottawa.

Now the U.S. version has hit the road, and legacy media outlets nearly uniformly are criticizing it as small and ragtag.

And the movement took a blow on Thursday when, just as wheels started turning in several parts of the nation from which convoys are planned, Russia invaded Ukraine and captured most of the nation’s attention.

But the wheels, in fact, are rolling, with convoys from Montana, California, New England and more development.

WFLA reported the drivers’ demand is to end COVID mandates across the nation.

The trucks already aligned in the effort carried signs including “Legalize freedom” and “Let them breathe,” a reference to the multitude of mask demands imposed nationwide.

The report cited many different “starting points, departure dates and routes.” Snow was forcing some route changes even as trucks started rolling.

Since Washington establishment figures already have been describing the truckers as domestic terrorists, they have made a point in stating plainly they are pursuing a “100% safe, lawful and peaceful journey.”

The goal is the finish up in the Washington area, about the time of Joe Biden’s State of the Union.

Driver Dallas Hughbanks, 61, said, “We’re not gonna try to block or blockade anything — just doing a convoy and bringing people to awareness.”

Even so, federal officials have lined up 700 National Guard troops and hundreds more police officers to confront the drivers.

MSN reported truckers coming from California had spent the night in Kingman, Arizona, before getting back on the road.

Patch reported another group will rally and convoy from New Jersey next week.

“Planned trucker convoys protesting vaccine requirements may snarl traffic on the Beltway, including from New Jersey and Pennsylvania, both before and after President Joe Biden’s State of the Union address on March 1. More than 100 New Jersey National Guard members will head to Washington, D.C., ahead of Biden’s address, Gov. Phil Murphy said,” according to the report.

The report confirmed spokesman Pat Callahan of the New Jersey State Police threatened that truckers, if they stopped, would be towed – much as Trudeau did to the truckers in Ottawa.

“It’s one thing to rally and travel on our interstates to get to a certain rally point,” Callahan said. “Where they go when they leave New Jersey is obviously up to them. I would hope that we don’t have to use our heavy-duty wreckers. If they come to a stop they will be ordered to keep moving, but we are planning for scenarios where we would have heavy-duty wreckers standing by to tow them at their expense off of our interstates.”