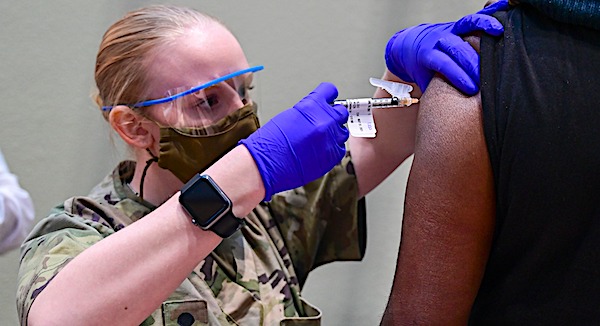 Officials in Washington State want so much to have everyone take the COVID-19 vaccine that they’re willing to drop a “gotcha” question on those who apply for a religious exemption to various mandates.

The report comes from the Liberty Daily and explains how state officials are equating ANY medication with the controversial COVID vaccines, which evidence shows all involve aborted baby cell lines in their testing processes.

Some of them even involve those cell lines in the production, and that’s a key trigger for many who raise religious objections to such vaccines.

The report explains Gov. Jay Inslee “pretends to care about the religious beliefs of his constituents who may object to the drug, but only as far as he’s required by law.”

According to the report, the state’s “guidance” for public school faculty and staff members who seek a religious exemption to the vaccine mandates includes several questions.

The first, “You assert that you have a sincerely held religious belief or religious conviction that prevents you from receiving the COVID-19 vaccine … Yes or no?”

“You affirm/agree that you have never received a vaccine or medicine from a health care provider as an adult. Yes or no?”

KOMO News explained Inslee claimed, “The purpose of this question is to understand whether there was a history of declining medical treatment or vaccination based on an applicant’s religious belief.”

Inslee said, “If they answer no, the HR professionals would engage in follow up questions to better understand the person’s history, such as demonstrating changes they have made as an adult based on those beliefs.”

The danger would be twofold, the report suggested, in that it equates any “medicine” obtained from a “health care provider” with the abortion-linked COVID vaccines.

Further, it would open the door for a government official to express his or her opinion on a religious belief.

Explained Liberty Daily, “This question will act as a hindrance for some. Those who have received past vaccines such as their flu shots will have the moral dilemma of whether they should lie in order to get their exemption. If they don’t, will that disqualify them? Probably not, but they will be put through indoctrination with their ‘HR professionals’ who will try to convince them to take the jab.

“It’s ugly politics. Nothing more. Jay Inslee and his fellow vaccine-pushers want no excuses for why people aren’t getting vaxxed. They want as many jabs in as many arms as possible, moral values and medical science be damned.”

KOMO reported there was a reaction from state Sen. Doug Ericksen, R-Linden.

“I think what you’re seeing here is a system that the governor has intentionally put out to make it as difficult as possible for someone to qualify under this exemption that he’s put out there,” he said.

“So, it’s pretty disingenuous to say you’re going to have a religious exemption and then place so many caveats and so many rules and restrictions on it that it makes it almost impossible for somebody to use honestly.”

Other employees are given a different option. They are ordered to “describe” their religious belief and then answer if they object to “all medical treatment, all vaccinations or only the COVID-19 vaccination.”

State Supt. of Public Instruction Chris Reykdal was demanding: “Obviously employees to have a sincerely held religious belief have to document that and they have to describe it, they essentially have to attest to that as well.”

Reykdal said a lot will admit they’re required to take the vaccine and line up.