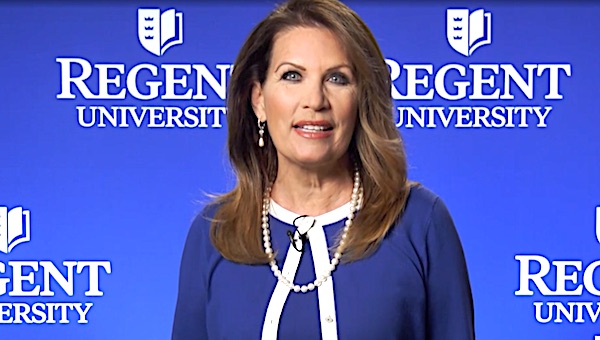 However, in a video interview Thursday with WND (embedded below), Bachmann cited the amendments themselves and argued that any expansion of authority must be seen through the lens of the power WHO wielded over the United States during the COVID-19 pandemic .

“The World Health Organization pronouncements were the bible for the American Centers for Disease Control,” Bachmann pointed out.

The WHO and the CDC are regulatory bodies, she acknowledged, but because of their “recommendations,” people were forced to lock down, wear masks and get vaccinated.

“They were treated as law by the Biden administration,” Bachmann told WND, adding that the emergency powers declaration under which the U.S. has operated during the pandemic has been extended to mid-July.

“The United Nations loves power. They live for power. And historically the United States has limited the power of the U.N.,” she said.

“This is just the opposite. This expands and augments the power of the U.N,” she said of the amendments.

The vote on the amendments will take place at the World Health Assembly in Geneva, Switzerland, May 22-28. Already, 47 nations, including every European Union country, have committed to approving the new rules. The existing WHO regulations grant an 18-month grace period during which a nation’s approval may be withdrawn, but the proposed amendments reduce the time period to six months.

‘A state of complete physical, mental and social well-being’
Bachmann – who served four terms in Congress, ran for president and now is the dean of the school of government at Regent University – noted a proposed change to Article 12, Section 2, line 6 in the WHO regulations erases an existing requirement that the WHO chief first consult with the government of a country for which it declares a health emergency.

“That’s the point where the U.S. authority is crossed out,” Bachmann said, “and the WHO director-general is empowered with unilateral authority.”

Then, she continued, “you read in context – with all of the other articles – and you see the enhanced power of surveillance, the limits on notification and the restrictions on states to be able to push back.”

“At minimum,” she said, “this should be discussed” in the House and Senate before the U.S. casts its vote at the World Health Assembly, “but that hasn’t happened.”

Significantly, the new regulations don’t require the WHO chief to publicly explain the reason for a health emergency. And the WHO’s broad definition of “health” opens the door to any number of reasons.

The preamble to the WHO constitution defines health as “a state of complete physical, mental and social well-being and not merely the absence of disease or infirmity.”

‘Reality’
The amendments did originate with the Trump administration, Bachmann acknowledged, but they were a response to China’s lack of transparency, which the WHO didn’t seem interested in addressing. The U.N. agency, for example, went along with Beijing’s initial insistence that the SARS-CoV-2 virus didn’t transmit human-to-human and, therefore, was nothing to worry about. And, among other egregious behavior, there was the Potemkin Village-style WHO probe of the origin of the pandemic in which investigators submitted to Beijing’s insistence that they be barred from examining the Wuhan lab where experiments on bat coronaviruses were conducted.

The Biden regulations, ironically, will only hinder the power of the compliant nations while China likely will continue to ignore any WHO regulations that conflict with its agenda of global dominance, Bachmann affirmed.

“There’s intention, there’s law, and the other side of that is there is reality,” she observed.

She noted that over the last two and a half years, if people disagreed with whatever WHO said, “they were thrown off Facebook by Mark Zuckerberg.”

End run
The AP fact check charged that some people who have been raising an alarm about the amendments have conflated the International Health Regulations with a global pandemic treaty that is being developed and scheduled for ratification in 2024.

However, it appears that the amendments to strengthen existing WHO regulations are an end run around the U.S. Constitution’s treaty clause, surmises journalist Daniel Horowitz. It’s highly unlikely, the reasoning goes, that 67 senators will ratify a treaty giving the WHO such power. But the amendments, which were quietly acknowledged only last month after being submitted Jan. 18, need only to pass by a majority vote of the World Health Assembly next week in Geneva.

The AP fact check, in dismissing concerns about the amendments, stated: “Member countries agree to abide by the guidelines, but the WHO does not have the power to enforce them, nor can it interfere in other countries’ decision-making processes, according to experts.”

However, Bachmann pointed out that failure to comply with a WHO emergency declaration can result in sanctions and fines from other arms of the United Nations, such as the International Monetary Fund and the World Bank.

‘The same guy who was horribly wrong’
Bachmann warned that the current WHO director-general, Tedros Adhanom Ghebreyesus, who has served as an “apologist and spokesman for the Chinese Communist Party” during the pandemic, was re-upped for another five years without any opposition candidate.

“The same guy who was horribly wrong for the last two years on the pandemic, now he’s going to have more power and more authority,” she said.

Tedros, who praised China’s response early in the pandemic, is a former member of Ethiopia’s Marxist-Leninist Party known for covering up cholera outbreaks in his country.

In January, the WHO chief said the treaty was a “priority” to “urgently strengthen WHO as the leading and directing authority on global health, at the center of the global health architecture.”

“We all want a world in which science triumphs over misinformation; solidarity triumphs over division; and equity is a reality, not an aspiration,” Tedros said.

“We are one world, we have one health, we are one WHO.”

‘Melt the phone lines’
Bachmann said members of Congress are only now becoming aware of the amendments, but many already are dismissing any concerns because of the argument that they originated under the Trump administration and are all about “holding China accountable.”

The former lawmaker urged citizens to express concern to their representatives, noting phone calls tend to be the most persuasive means.

“I’ll tell you, when people melt the phone lines, it gets noticed,” she told WND.

She also recommended forwarding to House members and senators articles by Dr. Peter Breggin, who was interviewed by WND earlier this week, former WND reporter Leo Hohmann and former U.S. Rep. Peter Hoekstra. On Wednesday, Dr. Robert Malone warned against giving the WHO and China “the keys the kingdom.”