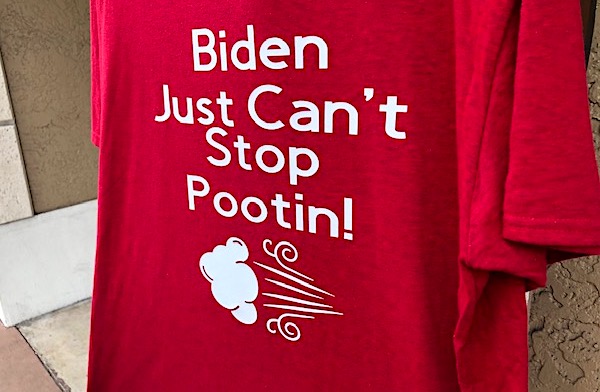 Joe Biden has been known to be deliberately insulting, as in 2020 when he inexplicably called a woman a “lying, dog-faced pony soldier.”

He’s also, many times, given the appearance of just blurting something out without having given his statement any thought, such as when in 2008 he told an audience, “I’m told Chuck Graham, state senator, is here. Stand up Chuck, let ’em see you. Oh, God love you.”

But now the Washington Examiner has compiled a long, long list of times when his staff members have had to clean up after Biden’s mouth is unleashed.

The report explained while Biden “has kept his aides busy by frequently misspeaking in ways that require walk-backs and clarifications,” recent reports charge that he’s getting frustrated with being cleaned up.

“Administration officials have deployed a wide variety of excuses for Biden’s many gaffes, including that he was simply being emotional, that he misremembered details, or that he did not mean the words he spoke,” the report said.

This all comes as his approval rating has plunged to depths explored by few other presidents ever.

According to the report, he abruptly said at the beginning of his term he wanted to get 150 million people vaccinated against COVID-19 within 100 days. Earlier the goal was 100 million.

Then spokeswoman Jen Psaki explained, “The president didn’t actually say, ‘The new goal is.’ The president said, ‘I hope we can do even more than that.’”

Then on the COVID-19 related school reopenings, Biden said they “probably all” should be open in fall 2021. “Senior White House adviser Anita Dunn seemingly walked back Biden’s statement days later, saying during a CNN interview that ‘we can’t look in a crystal ball and say what September looks like,’” the report said.

Then about the end of COVID, Biden said, “You’re OK. You’re not going to get COVID if you have these vaccinations.”

Psaki went on the fix campaign, with, “What the science says is that 97% of hospitalizations are people who are unvaccinated. So, yes, there are cases of individuals who are vaccinated, to be absolutely clear, who … have gotten COVID.”

But, according to Pentagon spokesman John Kirby, “We know that al-Qaida is a presence, as well as ISIS, in Afghanistan.”

Biden has stumbled multiple times on the issue of the defense of Taiwan.

“In August, he suggested during an unaired portion of an interview with ABC that the United States had a commitment to defend Taiwan militarily that is as binding as Article 5 of the North Atlantic Treaty Organization, which compels the U.S. to defend other NATO members under attack. He said, ‘We made a sacred commitment to Article Five that if, in fact, anyone were to invade or take action against our NATO allies, we would respond. Same with Japan, same with South Korea, same with Taiwan.’”

An unidentified White House official then corrected Biden, confirming the administration’s position had not changed despite Biden’s comments.

On his disastrous pullout from Afghanistan, and Americans left behind, The Examiner pointed out that not only was Biden corrected later when he claimed, “We have no indication that they haven’t been able to get, in Kabul, through the airport. We know of no circumstance where American citizens, carrying an American passport, are trying to get through to the airport,” he left the impression he was out of touch.

Both Ned Price of the State Department and Kirby were on the fix-it assignment that time.

Then the Tree of Life Synagogue had to correct Biden when he claimed, during a meeting with Jewish leaders, he had visited the synagogue after a 2018 massacre there. Officials said he actually didn’t visit.

Then Biden said, when Vladimir Putin appeared to be poised to invade Ukraine in what has resulted in a horrific toll of untold thousands dead, the U.S. might do nothing for a small incursion.

In his words, “It’s one thing if it’s a minor incursion and then we end up having a fight about what to do and not do.”

Psaki did the fix this time, with, “President Biden has been clear with the Russian President: If any Russian military forces move across the Ukrainian border, that’s a renewed invasion, and it will be met with a swift, severe, and united response from the United States and our allies.”

Biden also rejected the idea that midterm elections this year could proceed fairly without his Democrat election takeover legislation being adopted. He speculated, “It all depends.”

Psaki went for the mop-and-pail again, with, “Lets [sic] be clear, [Biden] was not casting doubt on the legitimacy of the 2022 election.”

Then Biden stated unequivocally his decision that Putin had to be removed from his seat in Russian government, with, “For God’s sake, this man cannot remain in power.”

Shortly after, Biden said of Putin, “I think he is a war criminal,” which Psaki later explained as Biden “speaking from the heart.”

Then, following the tragedies resulting from shooting episodes across the U.S., Biden threatened handguns, including the 9mm, the most popular caliber of handgun in the country.

“They said a .22-caliber bullet will lodge in the lung, and we can probably get it out — may be able to get it and save the life. A 9mm bullet blows the lung out of the body,” he said.

Karine Jean-Pierre, Psaki’s replacement, cleaned up, explaining Biden “does not support a ban on the sale of all handguns.”