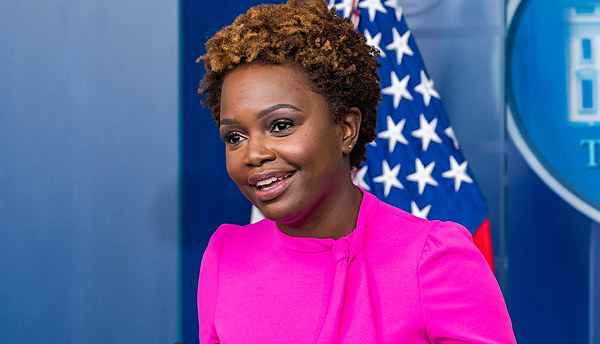 The result was predictable. Thousands, no millions, of illegal aliens walked across America’s southern border, creating a crisis there.

But now Biden’s spokeswoman, Karine Jean-Pierre, insists they are NOT just walking into the U.S.

Wading then? Swimming? Riding in trucks?

But definitely not “walking.”

The Daily Mail explained in a report that her comments came in a “prickly back-and-forth with Fox News Channel’s Peter Doocy.”

“Doocy asked Jean-Pierre why unvaccinated migrants can come into the U.S. and stay, while Serbian tennis player Novak Djokovic is banned from playing stateside due to his unvaccinated status,” the report explained.

Jean-Pierre claimed it isn’t that “simple.”

“It’s not just that people are walking across the border. We have a plan in place. This is not like switching the lights on. This is going to take a process. We are fixing a broken system that was actually left by the last administration,” she charged.

Actually, illegal immigration was there while Donald Trump was president, but at a much lower volume than during Biden’s tenure.

And Jean-Pierre claimed she couldn’t discuss the Djokovic case because of privacy.

Djokovic will not be participating in this week’s U.S. Open because he’s declined to take the experimental COVID-19 shots, and the Centers for Disease Control and Prevention hasn’t updated its policy, so it still bars unvaccinated foreign nationals from entering the United States.

Doocy also “scoffed” at her claim migrants aren’t walking into the U.S.

“Thousands of people are walking in in a day. Some of them turn themselves over, some of them – tens of thousands a week are not.,” he said.

Actually video and still images of illegal aliens, from a wide range of nations around the world including those that sponsor terrorism, actually walking across the border are legion.

The Blaze reported just days ago the U.S. Customs and Border Protection said the number of illegal aliens encountered at the U.S.-Mexico border in 2022 “will not only overshadow last year’s record-breaking totals, but constitute the highest number on record.”

This year the total already has surpassed 1.9 million.

Those encounters between illegals and border patrol agents riding horse, on foot, or on trucks, almost always occur when the aliens walk across the southern border, or in the case of a border along a river route, wading across.

Biden has been accused by Republican Rep. Paul Gosar of Arizona of facilitating “an invasion of our sovereign borders of more than 4.2 million illegal aliens since January 2021.”