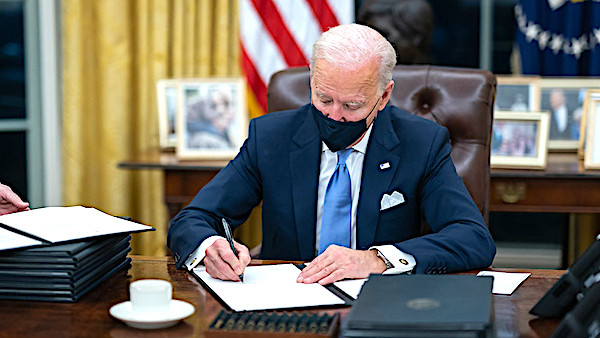 Would President Biden force doctors to perform abortions and “sex-reassignment” surgeries against their religious beliefs?

White House press secretary Jen Psaki would not say when asked by a reporter from the Catholic network EWTN on Tuesday.

The reporter noted concerns that “pregnancy discrimination” measures in the Equality Act, which has passed the House, “would force doctors to perform gender transition surgeries and sterilizations, again, even if it violates their conscience.”

“What does the president, President Biden, say about those concerns?” the reporter asked.

“The president’s been a long supporter of Roe v. Wade. It has been his consistent belief that should be law, and he will fight to continue to protect that as being law,” Psaki replied.

The reporter pressed further, asking, “Conscience concerns, is that a concern of his?”

“I think, again, I’m just going to state what the president’s policies are,” Psaki said. “Did you have another question?”

“Will President Biden keep the Conscience and Religious Freedom Division at HHS, the office that was put in place under President Trump, keep it in place to receive conscience complaints from those doctors?”

“You’ll have to talk to a future Secretary Becerra once he is confirmed,” Psaki said.

At a confirmation hearing last Thursday, WND reported, Sen. Rand Paul, R-Ky., confronted Biden’s nominee for assistant secretary of Health and Human Services on the government’s support for “sex-change” treatment and surgery. The exchange was particularly significant because the nominee is Dr. Rachel Levine, who would become the first transgender U.S. official if confirmed.

Paul wanted to know whether or not the government should overrule the authority of parents and support children undergoing hormone treatment and “surgical destruction” of their genitalia.

“Dr. Levine, do you believe that minors are capable of making such a life-changing decision as changing one’s sex?” Paul asked.

The Equality Act would prevent anyone from using the freedom of conscience protections under the Religious Freedom Restoration Act of 1993 as a defense in claims of discrimination based on “the sex, sexual orientation, gender identity, or pregnancy, childbirth, or a related medical condition of an individual, as well as because of sex-based stereotypes.”

“Discrimination on the basis of pregnancy,” the bill says, could be grounds for suing health-care providers who refuse to perform an abortion.