Woman drops dead at pharmacy within 15 minutes of booster shot

A Canadian woman who died within 15 minutes of receiving a COVID-19 booster shot was in good health, according to her daughter, who blames the vaccine.

Carol Pearce was in a text exchange with her daughter, Stephanie Foster, when she went to a Shoppers Drug Mart in Saskatoon, Saskatchewan on Sept. 14, reported the Alberta-based independent paper the Western Standard.

“My mom text me right after she got the shot to let me know she was waiting the 15 min and I text her back,” Foster posted on Facebook.

Meanwhile, Canada is lifting its requirement that anyone entering the country must be “fully vaccinated,” the Toronto Star reported. The paper said the move came after Canadians were preparing to take part in mass civil disobedience on Oct. 1.

A national survey in the United States by Zogby Strategies found 17% of adults who received at least two doses of a COVID-19 vaccine say they were diagnosed with a new condition within weeks to several months after getting the shot. The figure was 15% for those who had received at least one shot.

On Sept. 4, a fully vaccinated and boosted 24-year-old Canadian TV reporter, Matthew Rodrigopulle, died unexpectedly at his home of a heart problem. 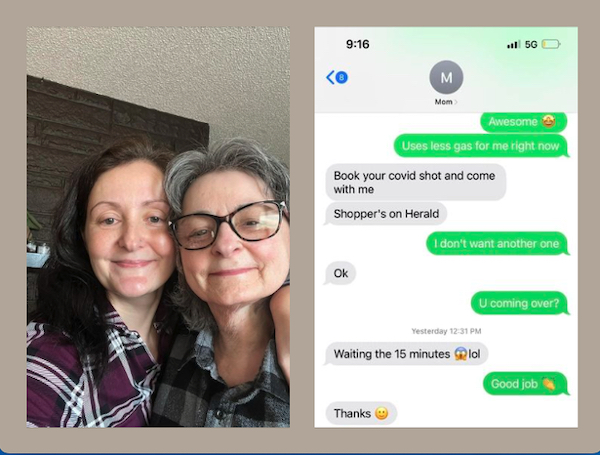 Foster said she was told by a doctor that her mother was “dead before she hit the floor.”

“My beautiful Mother’s life was taken yesterday by the COVID BOOSTER SHOT … She was happy and perfectly healthy,” said Foster.

A video was later posted on Twitter of a woman with the account Heart4Truth Twitter inquiring at the pharmacy about getting a COVID-19 shot and asking if anyone had suffered any side effects.

The employee said some people experience soreness at the site of the shot and others get a fever.

The woman pressed further, saying someone had died at the pharmacy after getting the shot. The employee didn’t deny her claim but said that due to privacy laws, she couldn’t say anything about the incident.

On Wednesday, a woman dropped dead at this Saskatoon Shoppers Drug Mart after her booster. A friend of mine witnessed it. Two days later, they are refusing to be honest with people about the potential harms. Please share, it could save someone’s life. pic.twitter.com/hvhKwl1TVy

The Western Standard reported a candidate for office in Saskatoon, Mark Friesen, posted a video on social media calling for the “experimental mRNA” boosters to be “immediately stopped.”

Laboratory data suggest these updated vaccines provide increased protection against currently circulating variants. If you received your last COVID-19 vaccine >2 mo. ago, I encourage you to join me & get your updated vaccine now. pic.twitter.com/SZS7VeJict