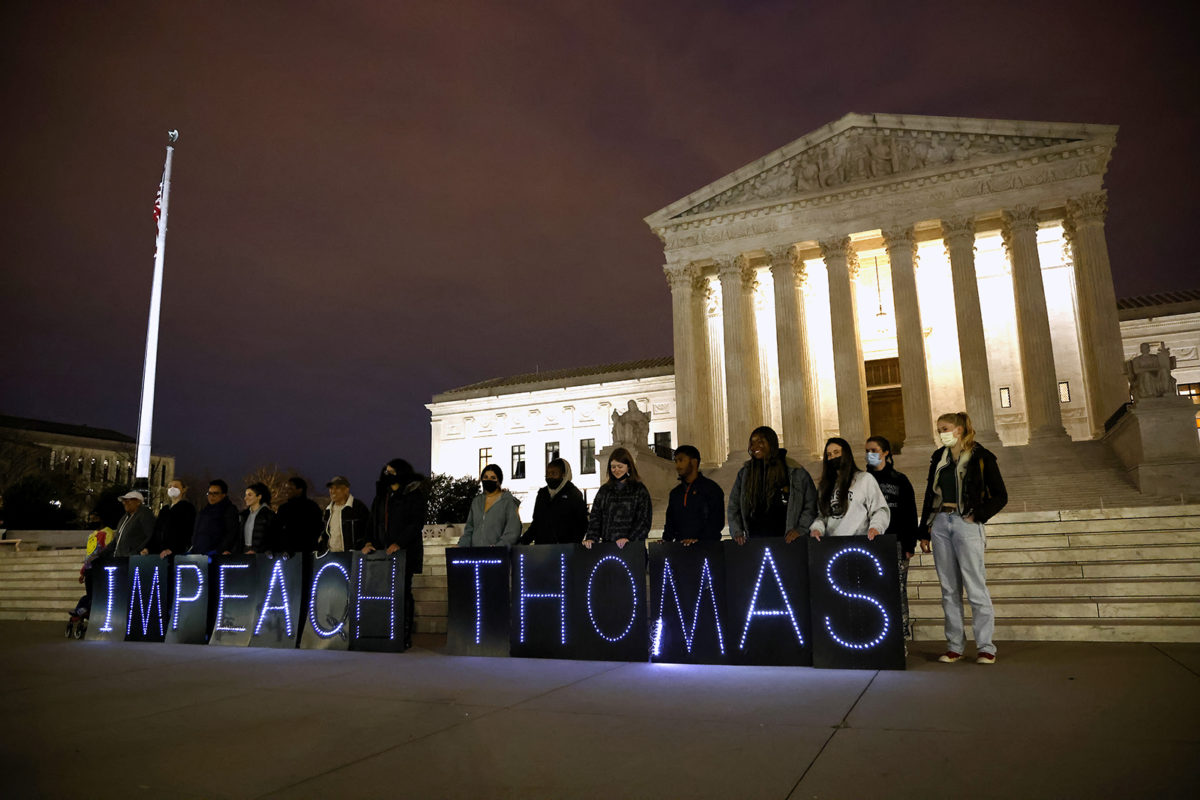 The nine-person Supreme Court was once beloved. On issues like abortion, school prayer, same-sex marriage, pornography, and Miranda rights, the Left cheered the Court as it made the law and ignored legislatures and presidents.

From affirmative action to Roe v. Wade to Obamacare, apostate Republican justices for a half-century greenlighted legislating from the bench.

In response, was there any serious right-wing talk of packing the court with six additional justices to slow down its overreaching left-wing majority – or of a mob massing at the home of a left-wing justice? Certainly not.

Suddenly a narrow constructionist majority has returned matters of abortion to the states. And the once-beloved Court is being slandered by leftist insurrectionists as illegitimate.

Every sort of once unthinkable attack on the courts is now permissible.

Confidential draft opinions are leaked illegally. A senior senator threatens justices by name at the doors of the Court. The homes of justices are surrounded by heckling protestors. And the very life of a justice is threatened by a would-be assassin close to his home.

Consider also the Senate filibuster. Former President Barack Obama not long ago ranted that it was racist and a 180-year-old relic.

Obama’s logic was infantile. When Democrats were in the Senate minority, he was giddy that the filibuster could slow down the Republican majority. Indeed, while a senator, Obama himself filibustered the nomination of Supreme Court Justice Samuel Alito.

When Democrats were in the majority, however, a pouting Obama blasted the filibuster as a racist, Jim-Crow roadblock.

Can the January 6 committee issue some universal declaration that defeated candidates should not question the integrity of an election, much less call for it to be ignored?

Apparently not. In 2016, a defeated Hillary Clinton claimed the winner, Trump, was illegitimate – this from the architect of the entire Russian collusion hoax.

Clinton then trumped her own inflammatory rhetoric by urging Joe Biden not to accept the 2020 tally of the balloting if he lost.

On racial matters, the Left is most intellectually bankrupt.

During the recent confirmation hearings of African American nominee to the Supreme Court, Ketanji Brown Jackson, the Left alleged that tough questioners were racists and sexists for “bullying” Jackson.

Yet she got the kid-glove treatment compared to the character assassinations of past conservative nominees. Brett Kavanaugh was smeared as teen-aged rapist and targeted by former Democratic media heartthrob Michael Avenatti, now an imprisoned felon.

Currently, loud mobs of affluent, young white women have been circling the home of African American Justice Clarence Thomas – just one of five court justices who voted to let the states decide the status of abortion.

Thomas did not write the majority opinion that overturned Roe v. Wade, but then again, leftists have a toxic fixation with Blacks who do not appreciate their condescension.

In the left-wing mind, the buffoonish Capitol riot on January 6 was an “insurrection.”

Yet the much larger May 31, 2020, riot that sought to storm the White House grounds and sent the president into a bunker was the sort of mob violence that “was not going to stop” in the words of now Vice President Kamala Harris.

The recent pro-abortion mob assault on the Arizona state senate, the Left insists, was an apparent cry of the heart.

What would the Left do if after 2022 midterms a Republican-majority Congress emulated its own infantile tantrums?

How about the House impeaching Biden twice, even as a private citizen in 2025?

And what if conservatives showed up screaming at the gates of one of Obama’s three mansions?

How odd that leftists are destroying the very customs and traditions whose loss will come back to haunt them when the Democrats lose the Congress in November.

Cry-baby tantrums won’t win over the public. These nonstop puerile meltdowns have turned off most Americans who tire of whiny narcissistic hypocrites.