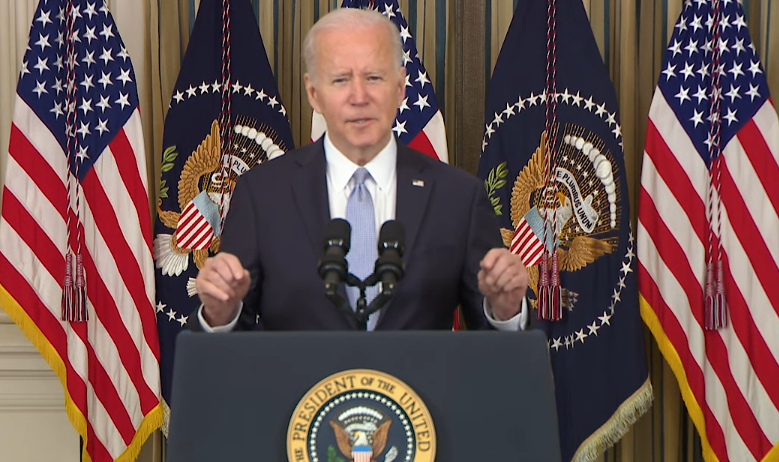 On April 1, President Biden was touting the latest jobs numbers from the Bureau of Labor Statistics, attempting to convey confidence in the U.S. economy, touting low unemployment numbers and the continued speed of the recovery from the Covid recession.

“[O]ur recovery has now created 7.9 million jobs — more jobs created over the first 14 months of any presidency in any term ever,” Biden said, adding, “In March, the unemployment rate fell to 3.6 percent, down from 6.4 percent when I took office about 15 months ago — the fastest decline in unemployment to start a President’s term ever recorded.”

But, the American people are not buying it.

Which, with 7.9 percent consumer inflation and 10 percent producer inflation the past 12 months, gasoline prices still over $4 and petroleum still very high at $97 a barrel, is little wonder. Even with peak employment and wages rising, the income from the American people’s jobs is still not increasing nearly as fast as prices at the grocery store.

In a similar vein, everyone knows that the economy has pretty much recovered from Covid. In fact, of the more than 25 million jobs lost to Covid, more than 16 million of them had already been recovered before Biden was even sworn into office. And so, Biden gets little to no credit.

But Biden and Democrats do get a lot of blame for the inflation, particularly after Biden signed his $1.9 trillion stimulus and $550 billion of new spending for infrastructure. Since Jan. 2020, the federal government has spent, borrowed and printed more than $6 trillion to combat Covid.

And consumer confidence, measured by the University of Michigan, is dropping like a stone in a lake, down to 62.8, even lower than it was during the economic lockdowns of the Covid recession when it bottomed at 71.8 in April 2020, and the lowest overall since 2011.

Also, the Federal Reserve is expected to keep increasing interest rates all year long at its upcoming meetings in order to combat inflation.

When combined with the supply chain crisis — production of everything slowed down globally in 2020 and then demand recovered sooner than expected — and the American people see little has been done to combat these problems by increasing production and lot to exacerbate it by printing more money, and then on top of it all Biden proposed to spend another $3 trillion for his so-called Build Back Better plan.

No efforts were made by Biden after high inflation became baked into the equation to pivot at all. This is the same paralysis and crisis of confidence that made Jimmy Carter a one-term president. Is Biden on the same path?

Certainly, looking forward to the Congressional midterms in November, Quinnipiac has Republicans leading the generic ballot 47 percent to 43 percent over Democrats, and lead the generic ballot by 3.6 points in the latest average of national polls by RealClearPolitics.com.

As for Biden, assuming he might still run in 2024, much may depend on when the recession strikes — and how severe it is when it does. If it happens sooner, there might be enough time for a recovery to go on and win reelection — Ronald Reagan had a massive recession in 1982 but went on to win reelection easily in 1984 as the economy boomed.

But a later recession of any magnitude, in 2023 or 2024, could be as fatal to Biden as it was to Gerald Ford in 1976, Jimmy Carter in 1980 and George H.W. Bush in 1992. At some point, voter attitudes set in—and right now they are clearly saying that Biden is failing.

The post 59 percent disapprove of Biden economy as inflation continues to rage with recession on horizon appeared first on Daily Torch.

This post, 59 percent disapprove of Biden economy as inflation continues to rage with recession on horizon, was originally published on The Daily Torch and is republished here with permission. Please support their efforts.