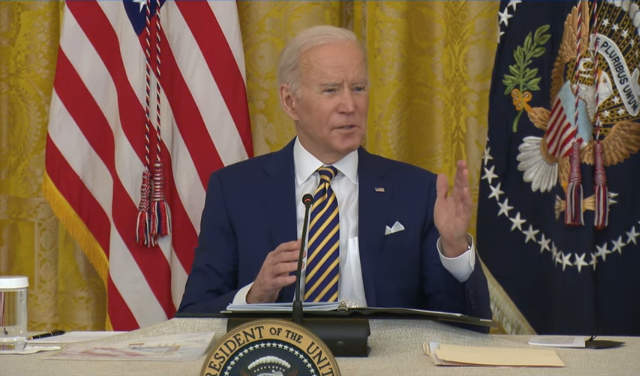 The Atlanta Federal Reserve is downgrading U.S. growth expectations, with its GDPNow metric projecting first quarter 2022 growth, annualized, will be just 0.1 percent, after 6.9 percent annualized growth in the fourth quarter.

That’s pretty bad, and it confirms other flashing warning lights that can found in other data. For example, the spread between 10-year treasuries and 2-year treasuries has collapsed from a recent high of 1.58 percent in March 2021 all the way to 0.61 percent as of Jan. 31.

If it inverts, that’s a strong signal of an imminent recession. 10-year, 2-year inversions tend to precede U.S. economic recessions on average by 14 months in modern history.

In 2019, with former President Donald Trump in office, when the 10-year, 2-year and 10-year, 3-month spreads were collapsing, and then briefly inverted in Aug. 2019, that was about all anyone on Wall Street and official Washington could talk about. A recession was imminent, and surely it would ramifications on Trump’s 2020 reelection bid.

But before it could strike, the world was hit by the Covid pandemic and the economic lockdowns that followed, all of which caused a recession all on its own and 25 million jobs lost here, 22 million of which have since been recovered. We’ll never know if the 2019 yield curve inversions were predicting a recession, and if so, when that might have occurred.

So, what gives? And where are the financial media watchdogs? Why haven’t they started alerted their readers of the economic weakening appearing in the data?

One voice in the wilderness appears to be Seeking Alpha’s Rida Morwa, who wrote in Dec. 2021 of the paradox of interest rates not rapidly rising to meeting inflation: “today, we are seeing a very interesting phenomenon, unseen in modern times. Inflation (as measured by U.S. Personal Consumption Expenditures) is running well above the 10-year Treasury yields, resulting in significant negative “real yields”! … This is a very interesting phenomenon, that we have only seen 3 times in the past 120 years in the United States: 1. During the Civil War 2. During and after World War I. 3. During and after World War II … The fourth time is happening right now!”

So, what makes today similar to massive war-time spending models? Morwa explains, “In all cases, for obvious reasons, debt spiked to unusual levels… The Treasury markets are pricing-in continued loose monetary policy. The Government will let inflation take its course to ‘deflate’ the national debt”, rather than curb inflation as they have been telling us. So, it is no wonder that Treasury yields refuse to go higher than they are today!”

On other words, the federal government’s priority has not been to control inflation at all during the recovery, but to use it to help paper over the trillions of dollars of debt the U.S. has incurred because of Covid. The national debt has increased by $6.7 trillion since Jan. 2020, largely because of all the spending Congress committed itself to: the $2.2 trillion CARES Act and $900 billion phase four legislation under former President Trump, plus the $1.9 trillion stimulus and $550 billion of new spending for infrastructure under President Biden.

Now, Americans are paying for it all, not with higher taxes or greater borrowing costs (yet), but presently via consumer inflation. But the price won’t end there.

What treasuries markets are saying right now — if we would just listen to them — is that the current high inflation could be enough to drive the U.S. right back into another recession.  That would mean negative growth, a new wave of jobs losses and maybe even deflation. It’s hard to know ahead of time how bad of a shock the economy is in for.

Certainly, it’s not what anyone wants to hear right now. Even without any economic weakness, the Congressional midterms would be a horrendous affair for the Biden administration and Congressional Democrats, with Republicans likely to regain majorities in both the House and Senate.

Now, with a potential Biden recession on the horizon, the White House must almost be in a full scale political panic about how to manage the fallout, and what it could mean for Democrats’ 2024 reelectio n hopes.

But that’s why we have a free press, right? To tell us the truth even when it’s inconvenient? Here, the Federal Reserve is already pricing in very low growth for the first quarter of 2022. There’s an economic storm on the horizon.

The question is whether the mainstream media and the Washington, D.C. establishment will alert the American people — and President Biden if he’s not in the loop, who on Jan. 27 just proclaimed “the fastest economic growth in nearly four decades, along with the greatest year of job growth in American history” — before it’s too late and the nation is caught flat-footed.

Right now, we could be whistling past the graveyard.