Bannon Convicted, The House Star Chamber Shall Not be Opposed 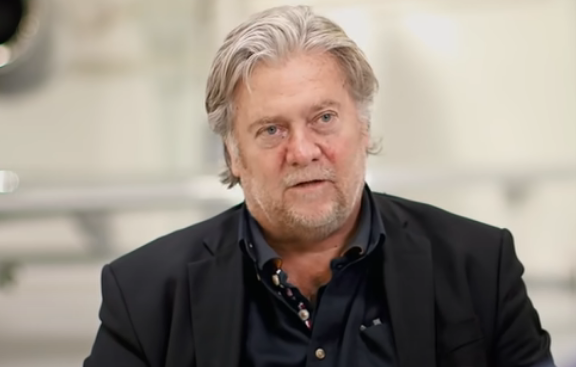 Steve Bannon has been convicted for contempt of Congress due to his refusal to testify before the on-going Get Trump prime time television show starring Adam Schiff, Bennie Thompson and in a very special role, Liz Cheney representing the Deep State.

Steve is an acquaintance of mine, who I genuinely like.  He was convicted because he had this naïve idea that in the United States you get to confront your accuser.

Silly guy.  When the accuser is the House of Representatives, and the prosecutor is the U.S. Justice Department, and the jury consists of DC swamp dwellers, you not only don’t get to confront your accuser, you don’t get to offer a defense at all.

So, a political witch hunt being conducted by the House of Representatives never has to justify itself in front of someone it is accusing of failing to comply with its demands.  The following statement by the prosecution sums it all up, “The defendant chose allegiance to Donald Trump over compliance with the law.”

Remembering that Bannon agreed to testify before the “committee” upon being notified by former President Donald Trump that their conversations should not be considered covered under executive privilege, it is fair to ask who is actually in compliance with the law?

Of course, the prosecution still occurred after the House Goon Squad got it’s way, because this is about political intimidation and not a “search for the truth.”

Former Democratic National Committee Co-Chairperson and Congresswoman from Hawaii  , “Steve Bannon has been charged with contempt of Congress & found guilty, while Brennan, Clapper & others who lied to Congress have never been charged or prosecuted. This just shows yet again how the DOJ has been weaponized by those in power to go after their political opponents.”

Let me repeat that last part because it is the heart of what we are witnessing. “This just shows yet again how the DOJ has been weaponized by those in power to go after their political opponents.”

The same weaponized DOJ which spent the entirety of the Trump administration attempting to concoct a case for impeachment against the duly elected President, whether it be under the guise of their false Russia collusion coup, or the false allegations about President Trump’s conversation with Ukrainian president Volodymyr Zelensky that led to impeachment, or the on-going January 6 witch-hunt.

A witch hunt designed to make it impossible to expose obvious corruption and election theft being conducted by many who called President Trump’s 2016 election illegitimate and stolen.

So far, the not ready for primetime committee has shown that states chose to send alternative electors to be considered by Congress.  These state legislatures did this because they became convinced that the certified electors were illegitimate and the Constitution provides for Congress to make the final determinations on the seating of a President.

Not a secret, everyone knew it was happening.  After all, to contest electors, the state had to provide alternate electors willing to make the case that those certified were improperly counted.

They have found that people counselled President Trump after the election that he should not proceed with challenges, and others counselled him to proceed. Earth shattering stuff, political advisors disagreed on how to proceed on important issue, talk about dog bites man.

They have found that President Trump was mad at Vice President Mike Pence for not aggressively pursuing actions which would have forced Congress to delay the vote until they investigated the election challenges.  No kidding.

What they aren’t saying is that all of the above is absolutely legal.

Refusing to accept a stolen election is legal.  Heck, Hillary Clinton still parades around claiming that she should have been president, and we aren’t even going to talk about Al Gore.

So now Steve Bannon may testify before this Star Chamber.  After being convicted though, he can probably tell them to pound sand.  After all, can you be convicted twice for refusing to obey a Congressional subpoena with those constitutional prohibitions against double jeopardy in the way?

Now look who is being silly.  Constitution, constischmusion. Orange man is bad, and everyone and anyone who supports him must be destroyed.

And somewhere, the invisible man, Kevin McCarthy, wanders Joe Biden-like around the Capitol, allowing the circus to continue.  Nary a peep about prices that will be paid by all, staff included, who have participated in this cowardly attack on the political process and free speech rights once Republicans retake the gavel from the power mad Pelosi.

With any luck, the GOP will have a 50+ seat majority in the House and those new members will choose against anointing anyone leader who fiddled while Nancy’s minions burned any semblance of honesty.

I’m old enough to remember way back when the Black Lives Matter folks lit cities on fire while extorting billions from woke, scared corporations, when we were lectured that Silence Means Consent.  It is time for Kevin to speak up, after all, Minority Leader McCarthy, your silence does indeed mean consent.

The post Bannon Convicted, The House Star Chamber Shall Not be Opposed appeared first on Daily Torch.

This post, Bannon Convicted, The House Star Chamber Shall Not be Opposed, was originally published on The Daily Torch and is republished here with permission. Please support their efforts.

Fed keeps hiking interest rates while unemployment remains low, but is the U.S. economy in for a hard landing or a soft one?