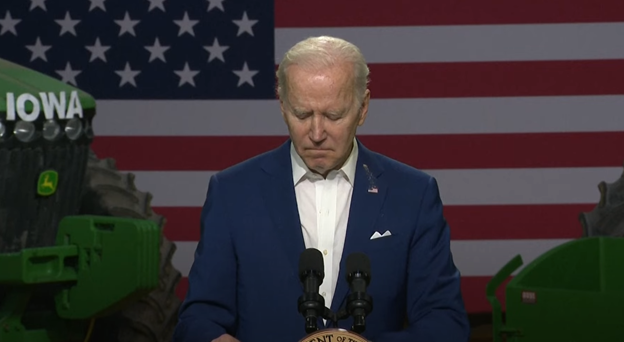 President Joe Biden’s plan to extend the availability of higher biofuel blends of gasoline during the summer months is a tiny bandage on a massive wound. Biden intends to allow the sale of E15, or gasoline containing 15 percent ethanol, to continue through the summer.

The move, announced during a trip to an ethanol plant in Iowa, is the latest attempt by the Biden administration to slow inflation, which hit a new 40-year high last week. The last time inflation reached 8.5 percent was December of 1981.

The Biden administration asserts that this move will save Americans 10 cents per gallon at the pump. But E15 consumption only accounts 814 million gallons, or 0.6 percent, of all gasoline sales in America, of which the U.S. consumed 134 billion gallons in 2021.

Additionally, out of roughly 145,000 gas stations across America, the White House admits that only 2,300 of those stations sell E15. E15 accounts for less than 1 percent of fuel of all fuel sales in America and is only available at 1.6 percent of gas stations nationwide. Average Americans are unlikely to drive additional miles to visit one of these rare stations.

With the national gas price average at $4.087 today and ethanol 30 percent less energy dense than gasoline, it is difficult to overstate how inconsequential the impact of this decision will be on lowering fuel prices. It will do almost nothing.

Under the 2005 federal Renewable Fuel Standard, and later expanded by the 2007 Energy Independence and Security Act (EISA) of 2007, renewable fuels such as ethanol are required to be increasingly blended into transportation fuels in an effort to reduce greenhouse gases. E10 fuel, or a gasoline 90 percent gasoline, 10 percent ethanol mix, is sold all year long.

Contradictory to the environmental claims of ethanol, the sale of is E15 is typically banned from June 1 to September 15 due to environmental concerns. Under the 1990 Clean Air Act, the E15 blend fails to meet the Reid Vapor Pressure (RVP) requirements and creates smog that is harmful to the ozone layer during the summer.

Furthermore, Biden’s move raises significant Administrative Procedures Act concerns. In fact, the D.C. Circuit Court of  Appeals struck down a prior bid by President Donald Trump to extend E15 waiver allowing sales throughout the summer. Considering that have been no major legislative changes, it appears unlikely that Biden will experience a different outcome from the court’s 2021 ruling.

The primary cause of high gasoline prices is failure of supply to keep up with demand. Virtue signaling with feed corn (the type of corn used in ethanol production) may sound good to environmentalists and Iowa farmers, but it does little to help the 50 percent of Americans who say gas price increases have created a financial hardship. 10 cent savings per gallon does not help the average American when there is just a 3 out of 200 chance the cheaper alternative will be available at their local station.

Green energy is not an inherently evil concept. However, forcing expensive green energy policies prematurely before they’re at sufficient scale, and telling Americans to suck it up and buy a $50,000 electric car, when their average annual household income is only roughly $67,000, is either evil or astoundingly ignorant.

The real answer is to drill more American oil. Allow for new leases on federal lands and do not reduce the number of acres available by 80 percent. Remove ESG goals from national oil companies. These goals are inherently contradictory to the existential purpose of an oil company. Allowing E15 this summer won’t even make a scratch in addressing these problems.

The post Biden allowing increased ethanol in fuel this summer is nearly useless and may violate the Administrative Procedures Act—again appeared first on Daily Torch.

This post, Biden allowing increased ethanol in fuel this summer is nearly useless and may violate the Administrative Procedures Act—again, was originally published on The Daily Torch and is republished here with permission. Please support their efforts.